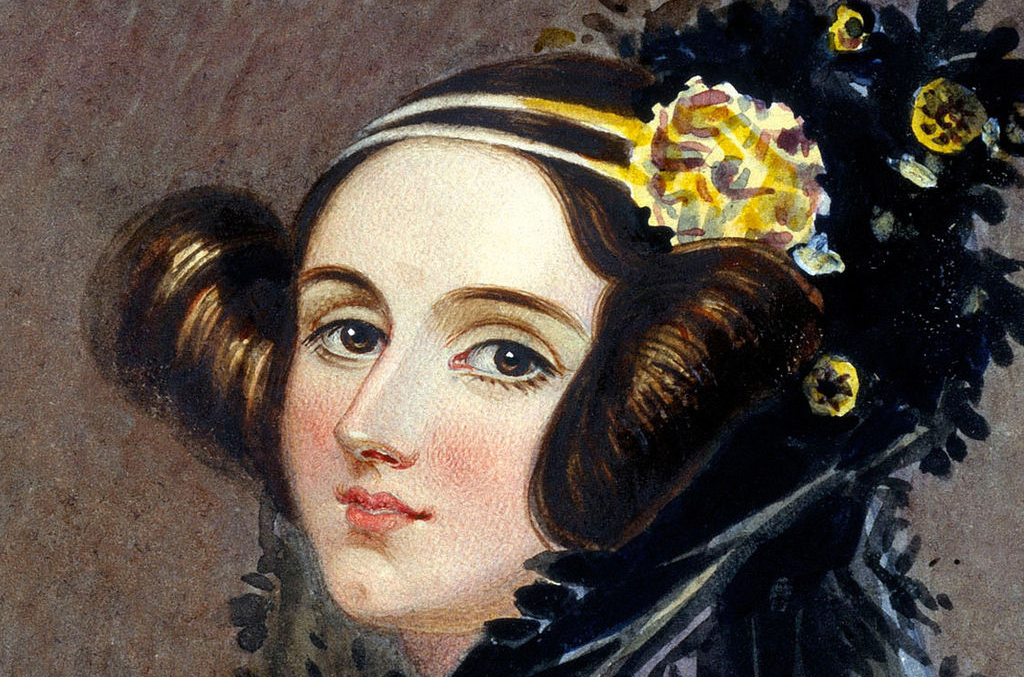 It is a sad fact of life today that while women make up around 46% of the UK workforce, they are extremely poorly represented in the STEM professions – in other words science, technology, engineering and mathematics. According to recent Government figures, if you exclude medical professions just 15.5% of UK STEM jobs are filled by women, and that figure drops to 8% when you look at engineering jobs.

Despite the gender imbalance being a mainstream topic of debate the situation doesn’t seem to be improving. According to 2014 e-skills, the number of women working in the tech sector has fallen from 17% to 16% again this year – and that is a figure that’s been falling year on year for over a decade now. When you consider that UK businesses face an ever growing skills gap when it comes to recruiting digitally skilled workers, it seems a no brainer that we should try to boost the number of girls enterting the field.

Women are not being held back by an inability to get educated – in fact the opposite is true. Research by the UK Commission for Employment and Skills has found that by 2020, 49% of women will have degree-level qualifications compared to just 44% of males. It also predicts that women will take two-thirds of the new high-skill jobs created over the next six years. Right now the report shows that girls are outperforming boys in GCSEs and A-levels, and there are more women graduating from university than men. Where these numbers go awry is that only 12% of engineering and technology undergraduates are female.

So why aren’t more girls taking up STEM subjects?

It’s certainly not the case the women aren’t really into technology (as I’ve heard so often in life). 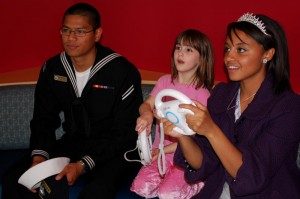 A study released last year shows that women now make up more than half the game-playing population in the UK. There are also studies that show women are the primary buyers for computers and other technology products for the household. So I know I’m not alone in my love of tech.

On the entrepreneurial front , while only about 10% of startup founders globally are women,  another new study published in July shows that women are behind about 65% of successful Kickstarter projects. And over at Indiegogo the numbers reveal that female led campaigns:

So what is going on to put young girls off when it comes to studying STEM?

Rewired State founder Emma Mulqueeny had an experience which I think throws light on one problem area. She decided to run a campaign to encourage more girls to sign up for the Young Rewired State hack weekends. By drawing attention to the gender disparity they actually experienced a fall in female registrants from 5% to 3%. In an interview with the Guardian in 2012, Emma Mulqueeny, said:

‘’It was because I shed light on it being a more male thing, and that’s like social suicide. They think you’ll only get nerdy girls if its boy dominated’’

In the end they engaged actress Lily Cole as a judge for the event and sign ups for girls rose to 23%.

My own experience supports Mulqueeny’s theory. I speak frequently at schools and education events and mostly the teenagers I speak to just want to blend in and get on with dealing with the messy business of being an awkward, hormone-dogged teenager. The last thing they want to do is something that marks them as different and potentially makes them a target. 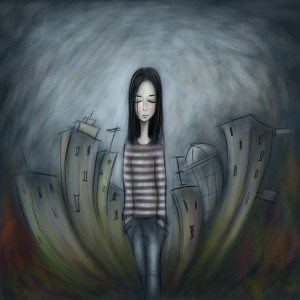 In the case of girls there is the added problem of something called Stereotype threat. Research has shown that, in environments where women are greatly outnumbered, or expected not to perform as well as their male counterparts because of gender bias, the pressure of not conforming to negative stereotype perceptions can actually cause them to screw up. So we’re kind of damned from the outset until people stop thinking like this… and that includes the way we think about ourselves.

Interestingly it seems like girls in all-female education are significantly more likely to choose STEM subjects. And I don’t believe it’s just down to the absence of boys but rather the absence of an expectation that the subject won’t appeal to them. This expectation may be wholly abhorrent to anyone with concerns about gender bias, but it is a fact of the past few decades of unconscious conditioning and the notion is reinforced by the lack of female students currently in the classroom. Everyone I have ever spoken to about this, who studied STEM subjects in an all-girl education envirionment, have said they didn’t even realise it was male dominated until they left school

Obviously we can’t put everyone in a girls schools (especially not the boys), and there are equal downsides to single-sex education in my experience… but there is also a growing body of research that supports these ideas.

It’s been shown that just changing the décor in the computer science room influences female sign ups. Gender neutral decor and open spaces that promote teamwork and collabotation are just small things but can make a big difference. Emphasizing the collaboration aspects of the sciences also encourages more girls to be interested. 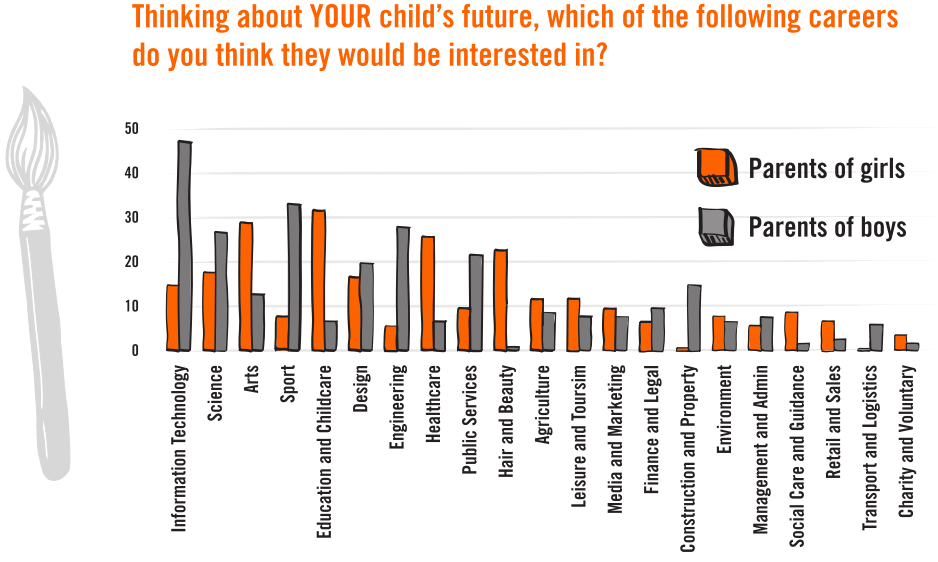 Parental influence too, cannot be underplayed. In March The Institute of Engineering and Technology launched a campaign called Engineer a Better World, which aims to inspire and encourage young people to consider a career in engineering. To support the launch the IET conducted some research into the perception of engineering careers both for children and their parents. As I learned hosting a Teen Tech event in South Yorkshire recently, children are still very influenced in choice of career by their parents.

As well as revealing that gender biases are still very much in play when it comes to how girls view careers in STEM, the research conducted throughout February in conjunction with Childwise also indicates that those biases are very much part of parental thinking too.

And for me, perhaps one of the most important things in this day and age… the boys need good role models too. They need to understand, fundamentally, from the very word go that it is not OK to discriminate against people. That a person’s gender is a non-topic when it comes to assessing their ability or worth, and using it as such will only make you look like an ass.

It’s really the core message behind the UN’s HeForShe campaign; that the responsibility for change in addressing this gender imbalance does not just lie at the door of the female of the species. Neither men nor women need to be forced to change. It’s about understanding and compromise. And that’s all our problem.

At Harvey Mudd college in California 40% of the computer science graduates are female. How have they done this?

To start with they made the introduction to coding course compulsory for all students. To make it more palatable they renamed the course from ‘An Introduction to coding using Java’ to ‘Creative approaches to problem solving in science and engineering using Python.’ Python also being a much more accessible language for beginners. Next they divided the classes into groups – GOLD with no coding experience, BLACK for those who had some coding experience. By creating a better environment for those with no experience to learn and flourish more female students became interested. The killing blow for this strategy was at the end of the first course to introduce them to a load of really awesome role models, women working in technology and doing great things, so the students could visualise where they might fit into the industry. Eventually the number or females signing up for the full degree term in the computer science lab grew to such an extent they were barely outnumbered by the men and this in itself attracted more females to sign up… Ahh.. Serendipity.