LATEST
Home Tech for Life Entertainment OPINION: “I have absolute confidence we’ll still be playing @EliteDangerous a year from now” 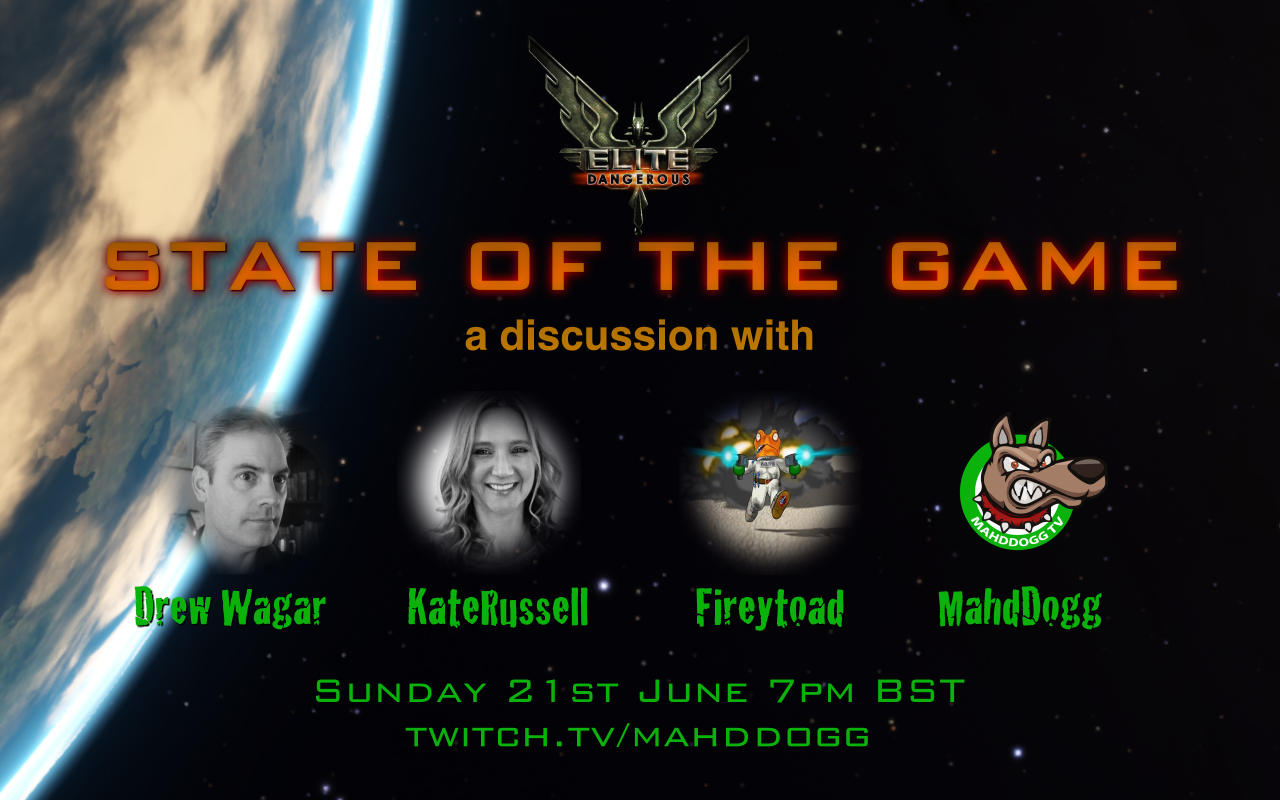 OPINION: “I have absolute confidence we’ll still be playing @EliteDangerous a year from now”

It’s amazing the power of a quote, especially when it’s attached to a vaguely familiar name from the media and expresses a sentiment you wouldn’t normally expect to hear from that person. It’s one of the reasons Mahddogg’s Twitch stream discussion on the ‘State of the Game’ Elite: Dangerous, recorded last Sunday has jumped about 500 views in the last 15 hours or so. The quote (taken completely out of context in the broader discussion) that caused a minor stir (and it was VERY minor) when the video was reposted on Reddit was: Kate Russell “So, they are not going to be making stuff for us. They have already got us. They have already made as much money as they can out of us.”

Ordinarily I wouldn’t even bother to address trolling like this – partly because it just adds fuel to the fire and partly because I forgot my Reddit password and the reset link never arrived. It’s also heartening to see from the comments on the thread that the internet is generally populated with intelligent adults who can recognise a shit stirrer when they see one, and have enough free will to decide to listen to a little more of the content and draw their own, very reasonable conclusions.

But I have decided to address it here on my blog – because I have a working relationship with Frontier and a lot of respect for all of the staff there that I have had dealings with. I would hate for them to think I have lost faith in their work.

For those of you playing catch up, here’s a little back story:

I supported Elite: Dangerous when it crowd funded on Kickstarter a couple of years ago. Since then I have enjoyed playing it and have become one of the regular, reasonably well-known broadcasters of the game, running a regular community Twitch stream on Sunday afternoons. There’s been some periods of controversy around development issues that certain people haven’t agreed with. I’m not going to dig into the dirty linen basket here, but it’s only to be expected when people feel a sense of ownership because they helped fund the game. There is also an emotional attachment because for a lot of the early backers the game’s great-grandparent, Elite, was our first taste of gaming back in 1984.

To be honest, I’ve not really been bothered by a lot of the changes/issues that have whipped some people into a storm. I have limited time for gaming – about 5 or 6 hours a week if I am getting the rest of my life-responsibilities done – so the things that don’t directly impact me are only of passing interest. But when PowerPlay was announced, which is a major update that adds a new layer of game play over the top of the existing infrastructure, and I saw that it potentially affected the control in the star system I named as part of my own substantial Kickstarter reward (with the support of my own Kickstarter I paid £4,500 to buy a license to write a piece of fiction based in the game), I took more of an interest.

The PowerPlay update is a complicated system and took some reading/discussion to get my head around. I even invited Elite: Dangerous streaming legend Fireytoad onto my show a few weeks back to help me (and my viewers) understand what it means for my planet of Slough. You can watch that hour-long discussion here if you’re interested.

After much deliberation I decided that I wouldn’t ally myself to a power and would continue, for the time being, playing the game without participating in the PowerPlay mechanic – which it has been repeatedly said you do not have to do. My problems with the feature is it ties you to set missions in order to build up your faction/influence with the power you choose (I prefer to make my own choices about what to do rather than grinding repetitive job cards), and if you do not continually contribute to the power’s objectives your progress decays (meaning if you have to take a couple of weeks away from the game because of work/life commitments you will be several steps back from where you were when you next log in).

This does not suit me, because I do not have the reported 15 or so hours a week to give to the game it requires to maintain your standing. I used to, when I was a lot younger and didn’t have such a demanding job and a mortgage to pay, but sadly not today. While I am vaguely disappointed that the latest, major update to the game contains no content I currently want to participate in, I concluded that I am not the target demographic for this feature. As a Kickstarter backer who will get all future game updates and expansions free because of the reward tier I pledged to, I am also not massively surprised that Frontier is not currently focusing all their efforts on making updates to please me. They need to attract a new audience. They need to attract a paying audience. That audience is likely to be younger people and console players who have more time on their hands/disposable income because they have fewer life responsibilities (and I do not say that to be condescending, if anything I am more than a little envious!). And I am happy for Frontier to focus on this goal because without more money coming into the game there will be no new updates for me either!

When I was invited to share my thoughts with other high-profile Elite: Dangerous streamers on Mahddogg’s show, this was the FIRST point I made, and the point from which that VERY cherry-picked-for-drama quote came from. If you care to listen to the quote itself, role back about 20 seconds and you’ll hear I’m talking about PowerPlay and not the game as a whole. You will also note there is a tone of laughter in my voice. Nuance is so easily lost in transcription and I want to make it clear this was not a blow at Frontier being a cash and grab company. I do not think that one tiny bit.

If you care to go on and listen to the rest of the three hour chat (yes, really… we spoke for three hours and over 250 people listened to almost all of it!) you will hear me praise Frontier for being a company that really seems to listen to its users (in MY experience, I know some would disagree with that!) and bends over backwards to accommodate our wishes where it can. Some of the devs/PR people frequently join in the streams and chat to the viewers openly about their questions, and Frontier has been INCREDIBLY supportive of the various charity initiatives we have put on streaming Elite: Dangerous. I said in the discussion I have no doubt that they will fix a lot of the problems I percieve in PowerPlay (such as giving the characters a more substantial narrative so that I feel more emotionally compelled to participate rather than it just being a grind for material rewards) and I am certain we will all still be playing the game a year from now. I am also VERY excited about the upcoming developments concerning walking on worlds and possible story lines concerning the return of the Thargoids.

I also stressed that in the meantime I will happily continue to play the game (although maybe not as obsessively as I did the first six months) because for me the major attraction is the community. We make our own fun. We hold demolition derbies outside Slough Orbital, we sit in space and waggle our wings at each other, my wonderful stream viewers create chaff firework displays to entertain me.

One inflammatory sentence pulled out of a three hour chat and used along with my name as a headline to boost some sad attention-seekers upvotes on Reddit doesn’t bother me in the slightest. But I hope the people at Frontier who might have seen that post get to see this one as well. Because they are people who work incredibly hard on something we all feel passionate about. And they are the ones who get my upvote.

If you have an comments or would like to discuss this article, please come and chat to me on Twitter 🙂 Thanks for reading.