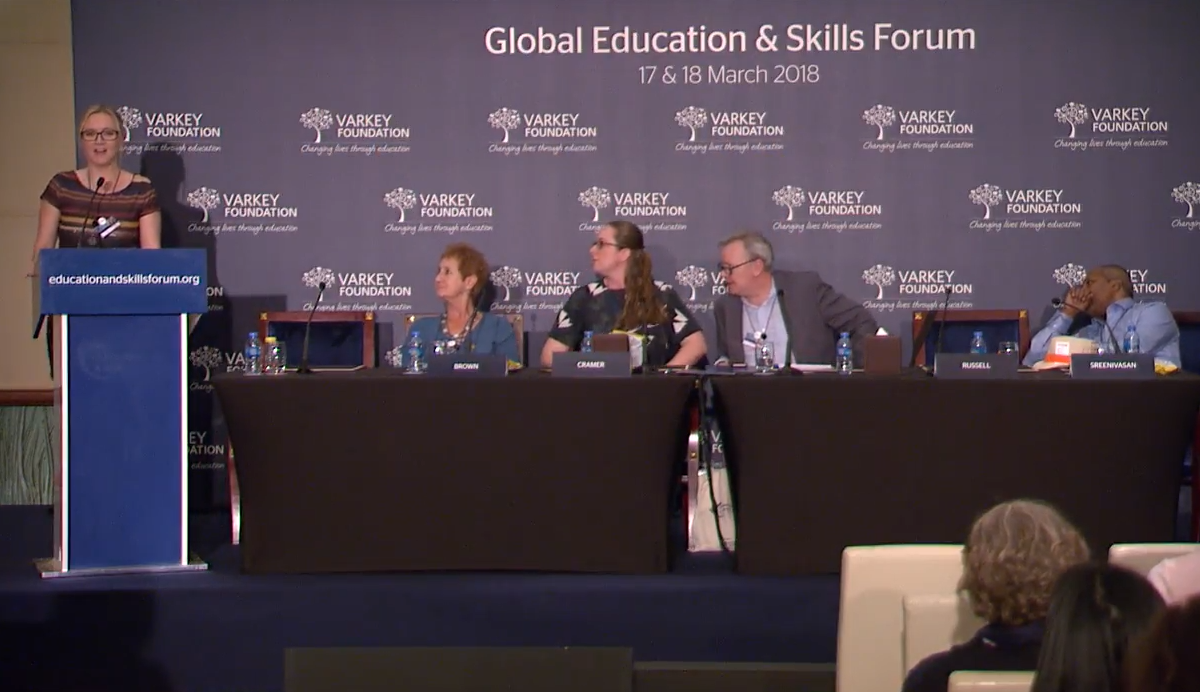 Last weekend I was invited to speak at The Global Education and Skills Forum in Dubai, where I sat on a panel titled ‘How students and educators can combat fake news’. As a reporter writing about internet and digital culture since 1995, I have matured professionally through the mass adoption of the internet and have witnessed first-hand the rise of social media from being non-existent to becoming the single biggest source of news for most people on the planet. In the audience for the panel were teachers, communicators, policy makers and representatives of the media and I asked them to start by thinking critically about what we were there to discuss.

The term fake news didn’t appear in the popular lexicon until mid 2016. At the time (according to this BBC article) the terms was popularised by meme website Buzzfeed when they noticed a surge of websites coming out of a town in Macedonia that were running outrageous and untrue headlines around the US Presidential election. Some teenagers there had discovered they could make a lot of money from advertising revenue if they got people on Facebook to click their links. It wasn’t about influencing the geopolitical climate. It was just about making a quick buck from an audience caught up in the drama of one of the most peculiar election spectacles in modern history.

Rebecca Cramer, a teacher from the UK also on the panel, said in her opening statement that students and their parents are still finding it hard to identify what is ‘fake news’, and I believe that this is because the term is way too broad for us to tackle effectively in an academic setting. It’s a media friendly term that’s become a catch-all phrase to dumb down the spread of misinformation and disinformation, for which there are many reasons and motivations to be spread online. Here are a few:

These are all very real problems in our modern connected world, and have very different motivations and consequences for society. Should someone propagating a deliberate lie in order to incite violence against a group of people really be categorised alongside someone who repeats a poorly researched rumour to look more popular on Facebook? Doing so must surely either a). diminish the heinous act hate speech or b). make people way too sensitive about a simple case of ignorance – neither of which are helpful in an educational setting.

I believe all types of misinformation and disinformation online deserve to be considered separately and not lumped together under the banner of ‘fake news’, which gives the misleading impression there is one solution for all, and perhaps allows us not to have to tackle the more uncomfortable aspects of human behaviour directly. Human culture is incredibly complex and (especially when teaching kids to examine information in a critical way) it’s essential we do not support this ideology of being able to smash together many concepts into one headline friendly phrase that seems to require no deeper consideration.

In the past 18 months the rise of the fake news banner has been so fast, and it so ubiquitous. It’s attached to sensational stories made up of drama, intrigue and celebrity gossip. In fact, considering its rapid proliferation and sensational connotations, I hope it’s not too meta to say that ‘fake news’ is the very definition of ‘fake news’.

On the flip side it is being used by high profile politicians and celebrities to debunk and discredit any critical article or report they don’t agree with. So rather than answering the claims or accusations with reasoned debate, they just shout ‘FAKE NEWS’ and walk away from it.

It’s my belief that young people need to be taught critical thinking at a much earlier age than university, which is where they typically learn it in a formal academic setting. With permitted access to popular social media sites beginning at 13 (and many young people actually access it much earlier), they are subjected to headlines, stories, thoughts and opinions that demand deeper analysis and fact checking before being taken as the only truth.

While I do teach, I am not a formally trained educator. I didn’t attend university, I taught myself technology through an era when it was new to everyone. So honestly, I don’t know how to go about teaching critical thinking young people. I’ll leave that up to experts. We had some good ideas floated in the panel session, such as a ‘Tripadvisor’ style peer-review rating system to help us recognise stories of either dubious or solid origins. When the question was raised ‘should social media sites be made to take more responsibility for content posted on their sites?’ for me that was a resounding NO! (with the obvious exception of taking down deliberate hate-speech and content promoting violence and terrorism). Doing so will only further restrict freedom of opinion and build the walls of those echo-chambers even higher.

In the long term I believe it’s about instilling a sense of curiosity and independent thinking into young people and equipping them with the tools they need for deeper research and the methodologies for using those tools effectively. They also need to be taught how not to become part of the problem by sharing and creating content that is misinformed.

But in the short term I believe the single biggest thing we can do is stop dumbing down the spread of disinformation and misinformation on the internet by labelling it all ‘fake news’.

We humans are a complex and multi-faceted species. We are curious, passionate and have many different emotions, motivations, qualities and flaws. We do not all need to have the same opinion. It is healthy to learn and sometimes change our opinion by talking and listening to others. Let’s make THIS the cornerstone of our children’s critical thinking education and perhaps we will start to see a more tolerant, thoughtful and informed society evolve.

You can watch the full debate below, and I welcome your feedback, comments and opinions on Twitter.