LATEST
Home Briefcase NEWS: #SloughBellsRinging off to a bumpy start NEWS: #SloughBellsRinging off to a bumpy start

Two days into my attempt to broadcast Elite Dangerous gameplay for 14 nights over the Christmas break and I thought I would write a quick post to update those who missed the start. To recap, I’m trying to raise money for Special Effect, and on this front the two nights played so far have been successful beyond my hopes. On Thursday we raised around £300, and yesterday £310! If we carry on like this we’ll make over £4,000 for this great charity, which will be an amazing end to one of the most spectacular years I’ve ever had.

As well as coming in to the game pretty green (I played the beta quite a bit but have been too busy until now to really get stuck in since gamma launch), I am a complete novice broadcasting through Twitch, so it has been a learning and balancing act getting everything running smoothly. Thanks to all the watchers who have been feeding back on that. The one thing I am really disappointed I didn’t have set up the first day was archiving the broadcast to watch later. There is a sneaky little tick box under the settings that wasn’t ticked! Last night I set my broadcast software to record it, and you can watch the full 2 hours here. I have also embedded a short highlight reel from Day 2 at the bottom of this post.

So, day one is forever lost but I can tell you the highlight for most watching was when I accidentally used my engine boosters inside Lave Station trying to leave it for the first time. I had sold my spare ship in storage for 40k credits, which gave me enough cash to load up my hold with rare Lavian Brandy, so when the watchers saw me crash into the inside of the station at full pelt, destroying my shields in one hit and reducing hull integrity to 3%, they were understandably nervous for me as I decided to jump to Leesti without redocking for repairs. I made it without further event though and once repaired added to my stash of brandy with some Leestian Evil Juice. An appropriate theme for my character, Commander Angel Rose, was emerging so I grabbed some wine to fill up my hold and we had ourselves a galactic booze cruise. 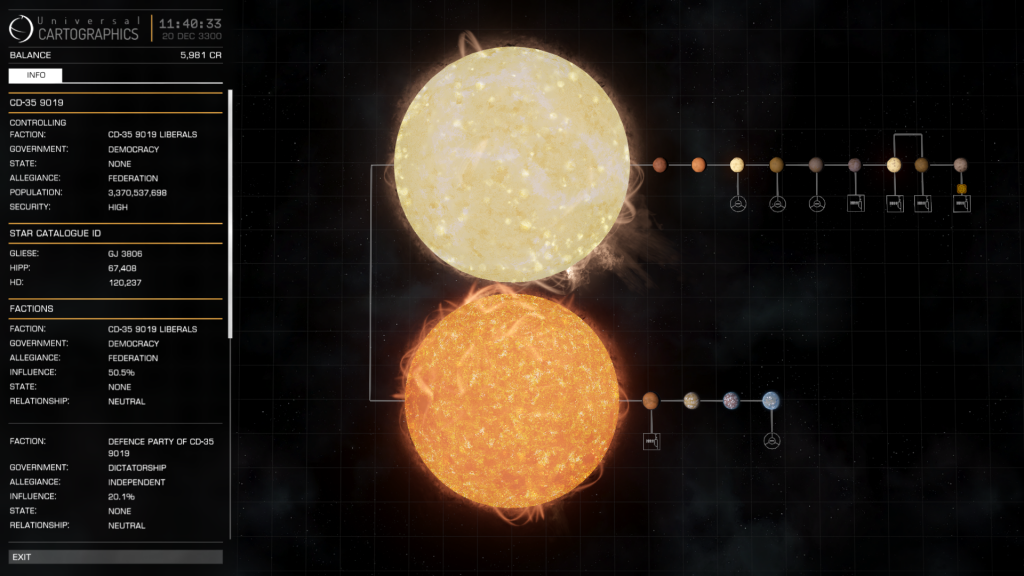 Day two began and we were in CD-35 9019, an interesting star system with two suns and plenty of space stations to explore, so we decided to stick around and see if we could get familiar with making discoveries and pick up some creds running missions around the system. This proved pretty fruitless in the end as I had loads of rare booze filling up my hold so couldn’t actually take any missions to trade. The channel decided collectively I should stick with my rares as the prices are not so good in this star system. I hooked up in live play with some of the watchers (who gave me a lovely wing waggle and flashing lights) then together we plotted a course for a nice remote star system in the hope they were ready to party and would pay handsomely for my booze.

We almost made it too… I jumped out of super cruise 9k km from the target space station, requested docking at 7.5k… and was just steering towards the entrance when… BOOM. One of my followers, Phil Hibbs, jumped out of hyperspace and was accidentally on top of me, ramming my ship and blowing it up. That was it.. ship destroyed and all of the highly flammable alcohol was instantly vapourised. I respawned back in CD-35 9019, no cargo, limited credits, light years from where I want to be. Sounds just like the kind of thing that would happen to Angel Rose.

We continue the journey tonight on my Twitch channel. 19:00GMT at Liksa Station. I’m going to need to find a safe area with some good trade opportunities and spend the night grinding missions for a little cash… but at the end of the session we have more great giveaways for those watching to say thank you for raising money for Special Effect. Even if you don’t play Elite, head over and see what’s going on. We have a lot of fun and you can just lurk in the shadows watching until you feel ready to join in the chat. I really hope I see you tonight for #SloughBellsRinging DAY3.