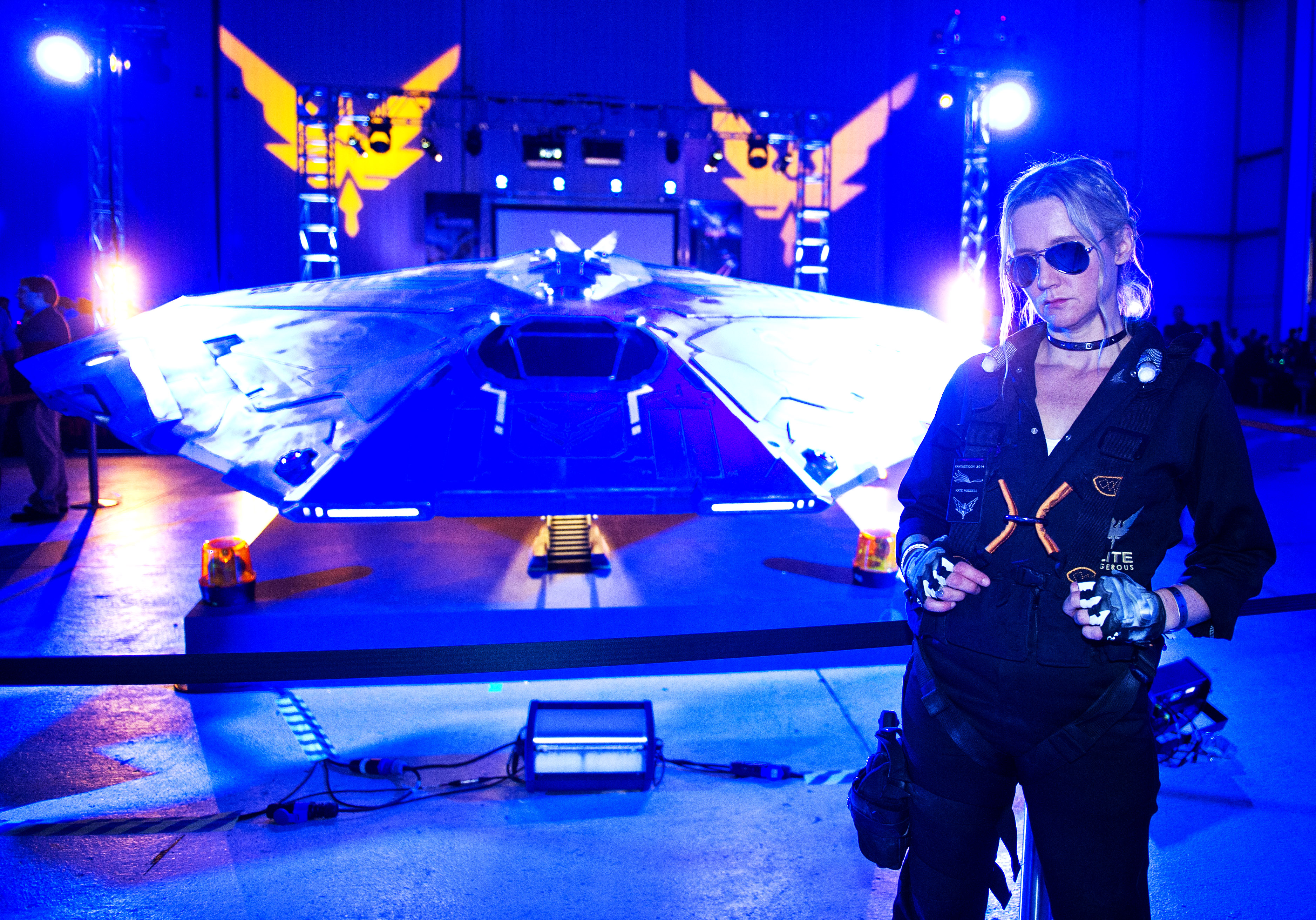 NEWS: Elite Dangerous premiere. Do you think I had fun? 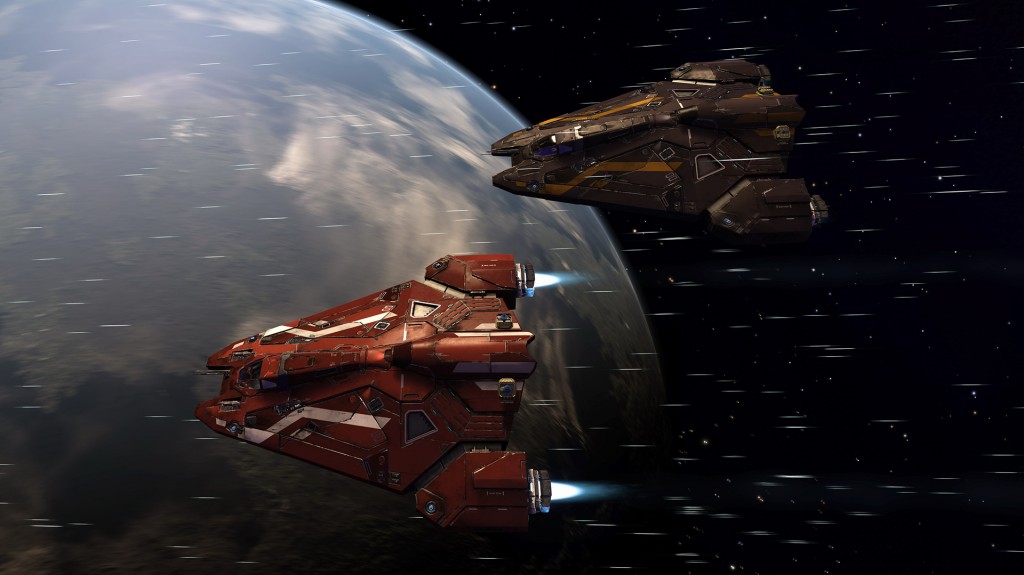 It’s been two years coming; riding the tail of the comet that is Elite: Dangerous to reach the cosmic conclusion that was this weekend’s premiere. Throughout this time I’ve been amazed and inspired by the community that surrounds this game. It grows closer and yet wider all the time, and the event this weekend felt like the cementing of that community around common goals; to play a great game and enjoy each other’s company doing it.

I was called to the venue early as I had been invited to speak on the Twitch TV feed and they wanted to rehearse. I had decided to come in 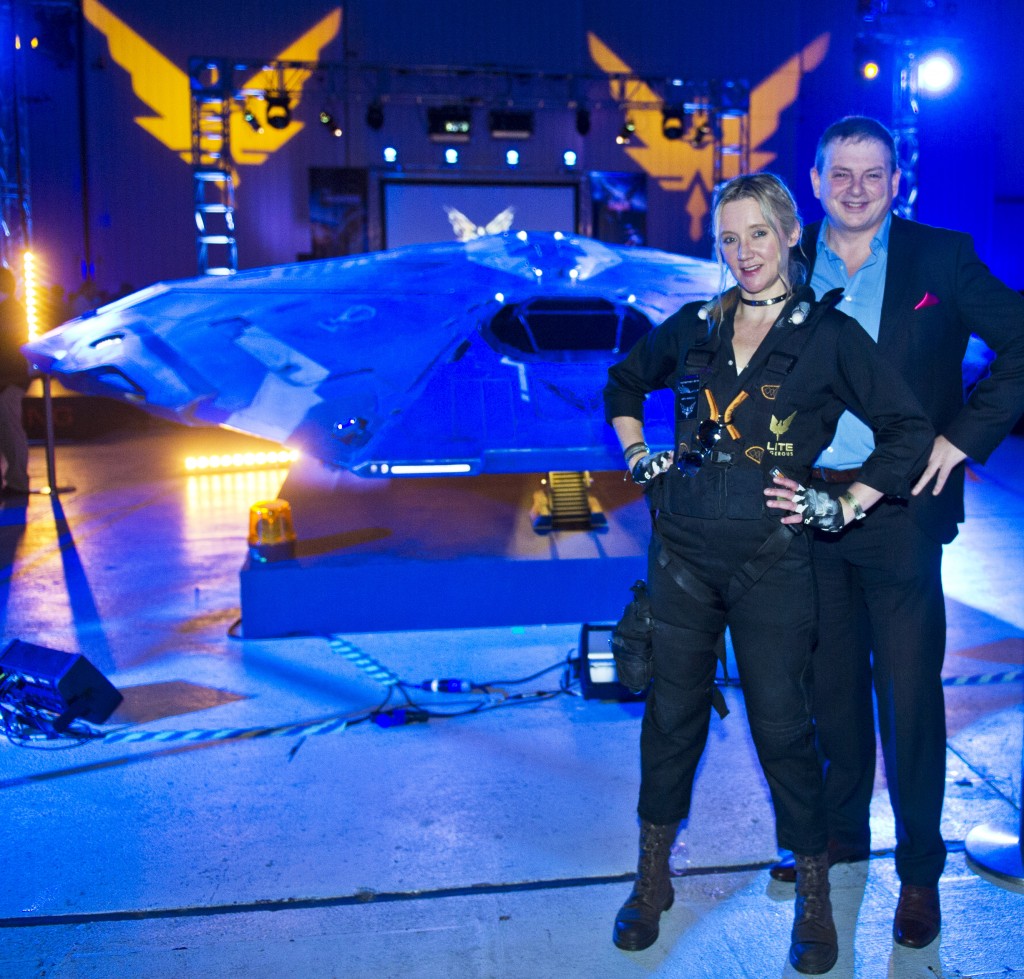 cosplay as Angel Rose from my book, complete with remlok survival mask dispenser and laser gun. This seemed to make people smile at me a lot, which was nice, but it made it kind of hard to stay in character from my novel and scowl at everyone all night.

By the time the doors opened at 6pm the queue stretched right around the building. I heard that the numbers were around 1000 on the night, though not from an official source. The aircraft hangar Frontier had taken over at the Imperial War museum was lit with stark, spacey spotlights, sending sharp, mechanical shadows crisscrossing through the space. It was very moody. Having met up with my eBay +1, the very generous John Gunn who bought the ticket for Special Effect charity, we started making our way over to the buffet.

I was quickly to learn that making my way anywhere tonight was going to be a very slow process! The place was brimming over with people from the forums, fans of BBC Click or backers of my own Kickstarter for Elite: Mostly Harmless. There were selfies and group shots and signing requests abound. I have not had so much fun or felt so much like a star before! 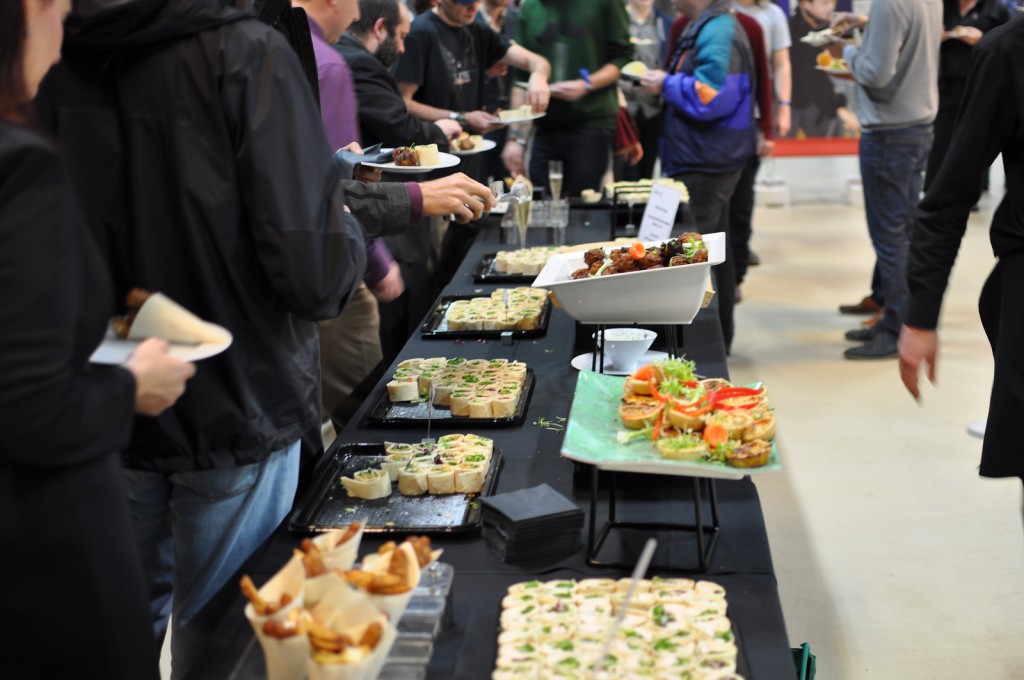 The hangar doors opened at 7pm, and it was immense. The whole place vibrated with music and sound effects, the classic Blue Danube playing as prominent a part as you’d expect.

Parked up beside a Eurofighter Typhoon was a replica cobra, a little on the small side but remarkably detailed. We had some fun working out the best perspective for a shot standing in front of it later, which I think Ken Lennox who took my header shot captured perfectly. 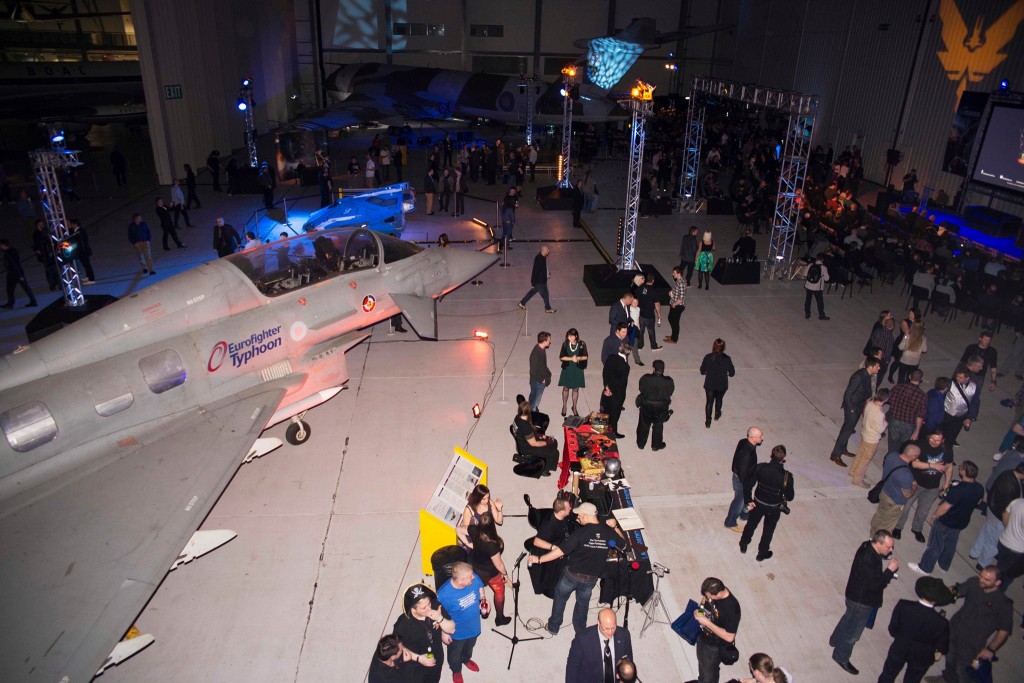 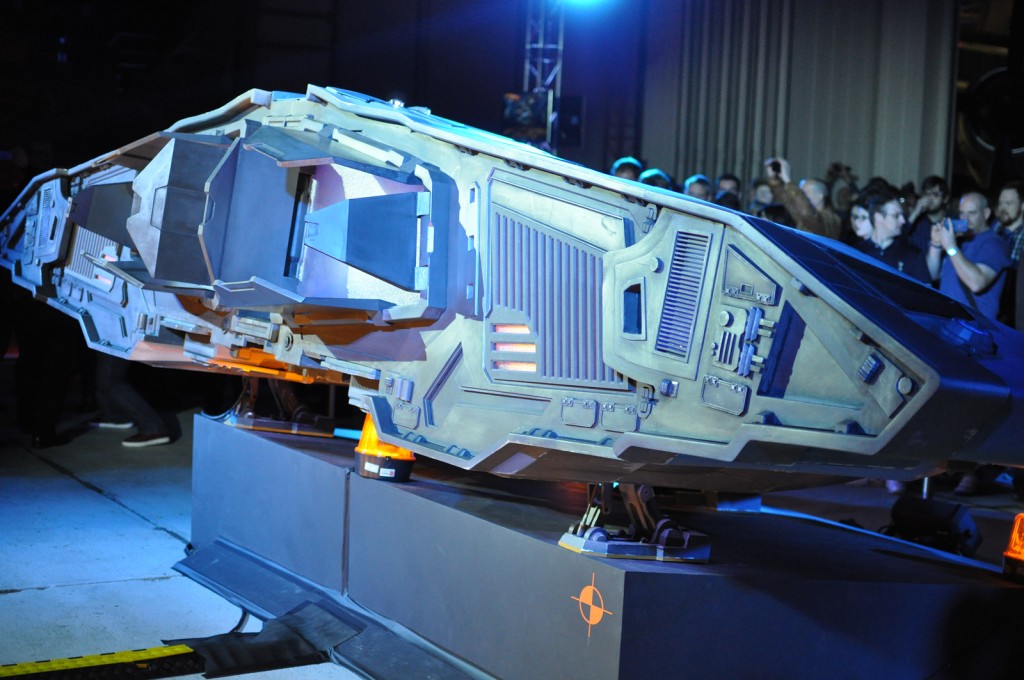 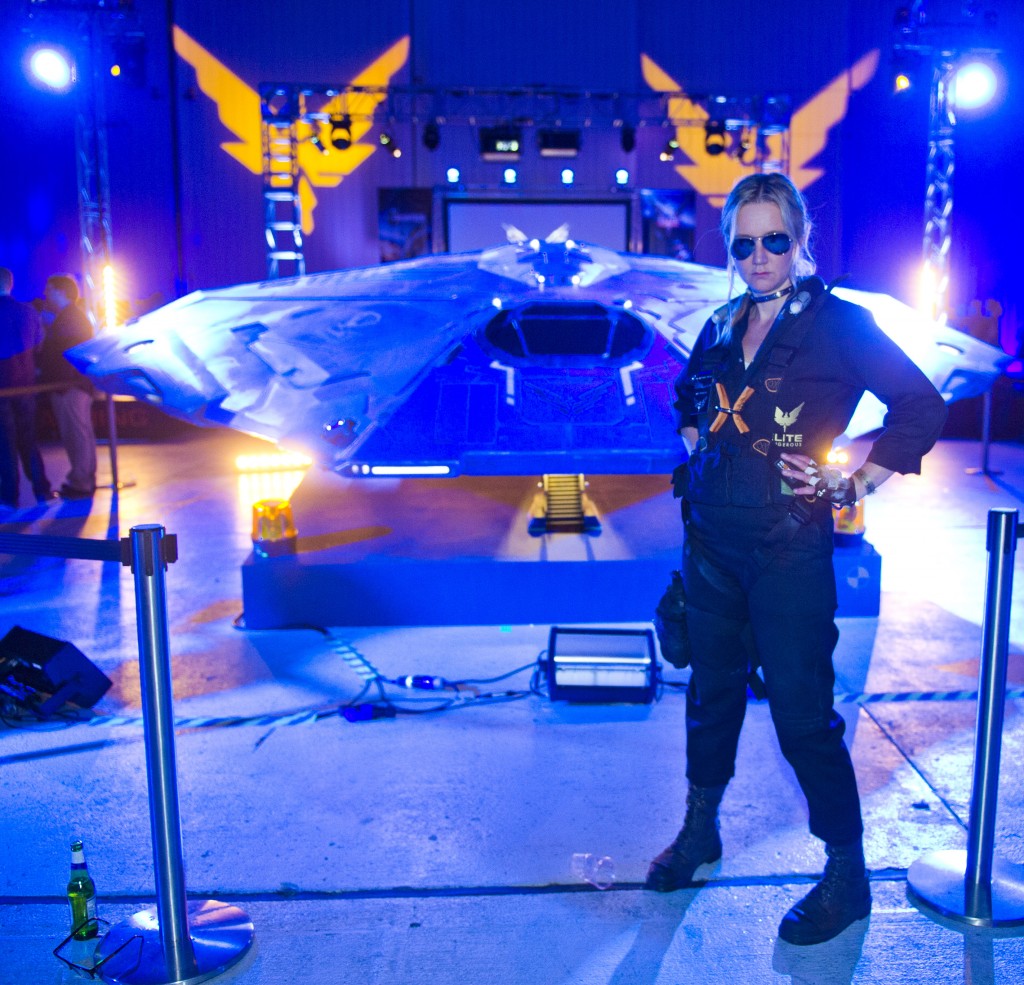 The grand reveal was a ‘you had to be there moment’ as the venue played a huge part in the whole sensation. Surrounded by all that history, getting sucked into the future… Rory Cellan-Jones posted this video, which is the only I have seen of the opening so far, and it captures some of the excitement: 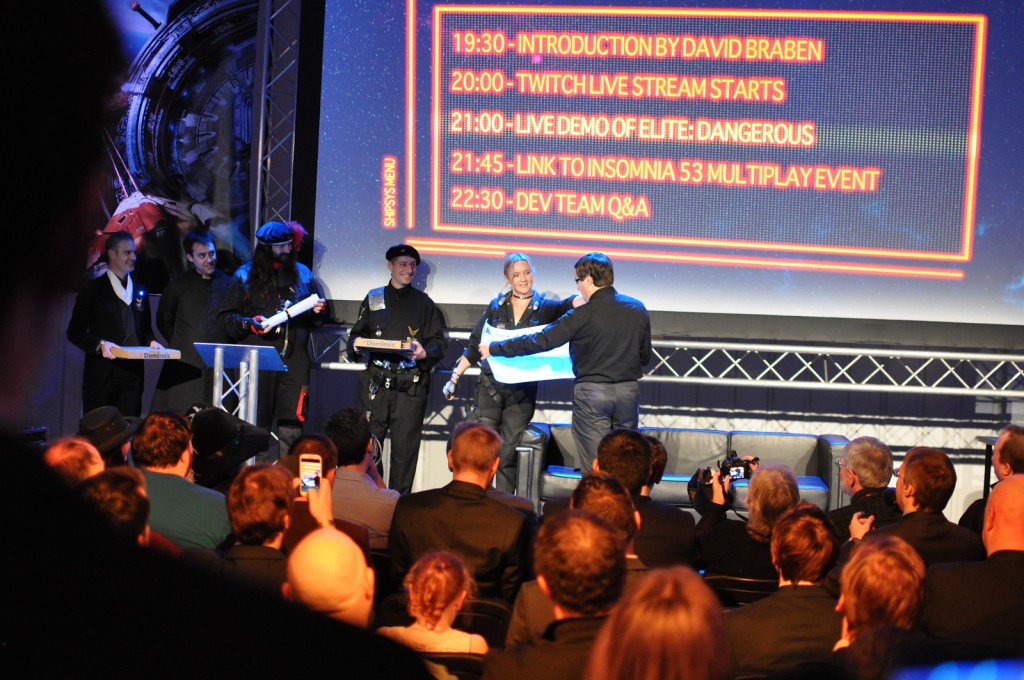 image Robisher.net – the community crew on stage handing over the space loot

Next on the agenda for me was a presentation to David, surprising him on stage at 7.30pm when he made his official welcome speech. Since the early days following the  Kickstarter there has been a tradition called the ‘release day pizza club’, where the community club together to send a stack of pizzas to Frontier’s offices during those crucial server updates. In celebration of the premiere, this community dug even deeper and raised a whopping £2,209.84 and I was due on in half an hour to hand over the loot.  Still trying to get to the buffet table I suddenly heard David start talking, welcoming everyone to the event.

I squealed, leaving my poor +1 behind as I dashed to the Lave Radio stand to meet the others. In a panic as David wound up his speech I barged through the crowd clutching a stack of pizza boxes to my chest and shouted breathlessly, “STOP!”

He was blown away to open two huge cheques (in both ways actually), printed courtesy of the amazing Liam Mobius Rafferty, each for £1,104.92 and made out to Games Aid and Special Effect.  As well as the cash there was a plaque,  made by the immensely talented Iain McNeil, which I am pretty sure brought a tear to the  Creator’s eye. This amazing collection was the brainchild and hard work of a few key forumites, led by Mike Snoswell and Grant ‘Psycokow’ Woolcott, who really deserve credit for such an awesome job too.

The presentation was not part of the official proceedings but luckily Deryk Lister filmed it and posted it on Youtube: 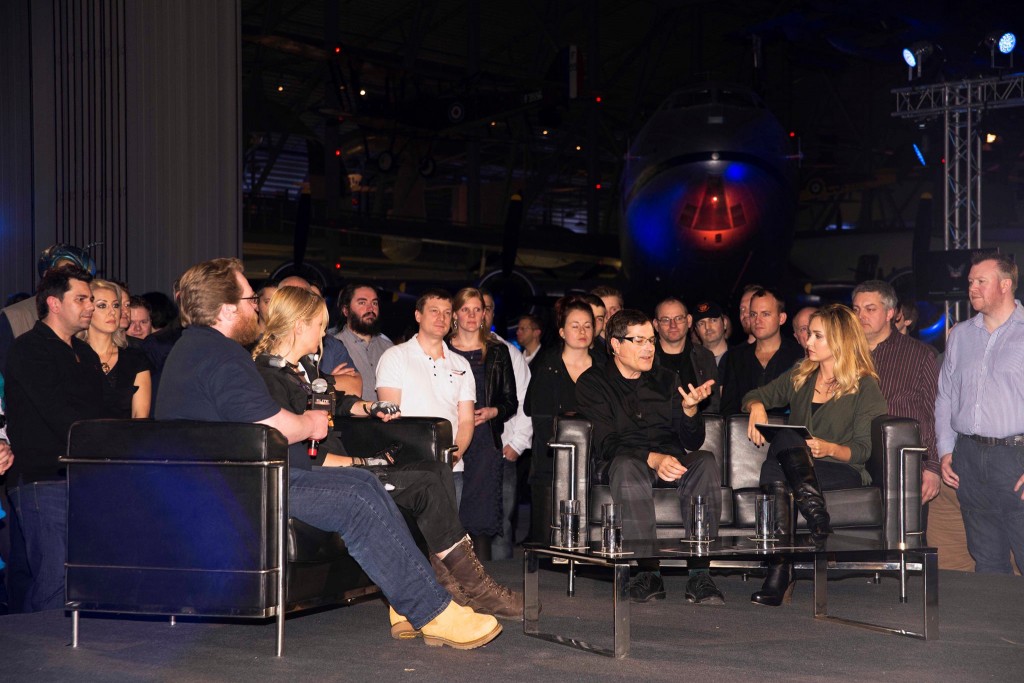 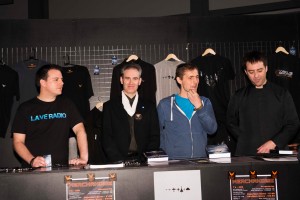 After the crowd started mingling there was a chance to grab a drink and head over to the stage area for myinterview with David and Michael on Twitch TV. They gave me a good chance to talk about the books, for which I am truly grateful, and I hope even more people get to read them now. The rest of the authors were on afterwards to talk about their experiences, and I have to say looked rather splendid lined up on the merchandise stand with our books and audio books all about them. 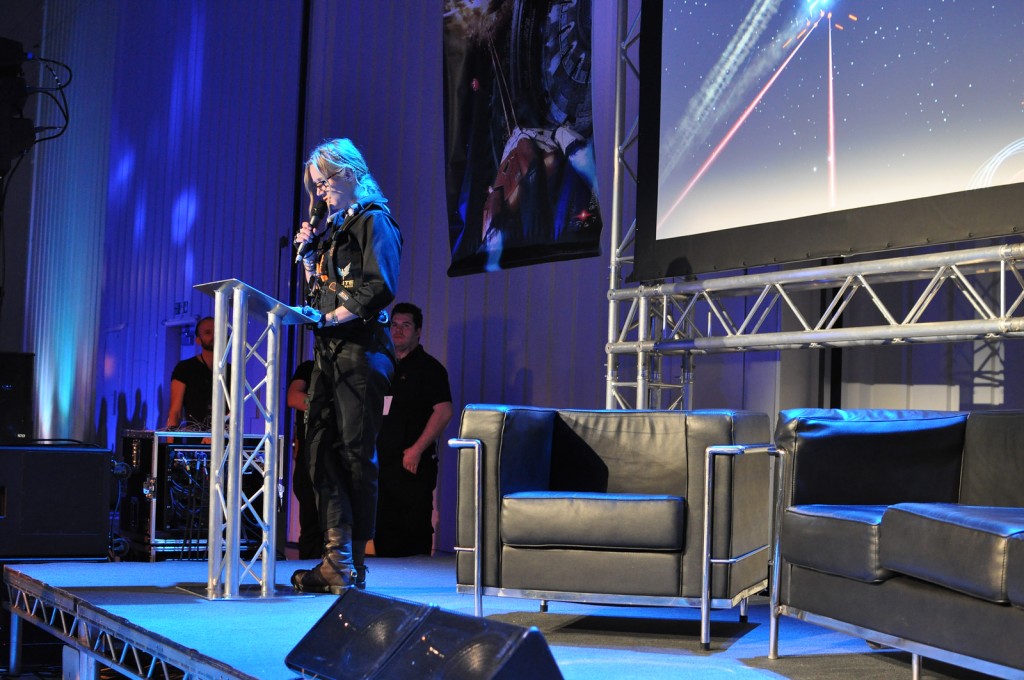 For me, the final part of the official proceedings was a live reading. Originally planned for 10pm it was pushed back by an hour to allow us to use the amplification on stage, as the original spot proved challenging in the wide open space of the hangar with no mics. All the authors read to great reception, as ever, from this wonderful, welcoming and supportive community. Personally I am just thankful I was still able to speak, since I had still not managed to find my way to the buffet (although somehow I often found myself right beside the bar!).

Overall the party was a lavish and brilliant experience, but set against the back drop of the air museum and all the massive engineering on display it managed to maintain a gritty integrity befitting the game. I heard several people say they had never been to such a fancy launch, but it reminded me of the launch parties in the mid 90s, which triggered another wave of nostalgia for my days as a games journalist. Ah, memories. It’s enough to bring a tear to the eye. Thank goodness for Twitch archives too, as I missed the whole damn show being pulled all over the place, and the sound was a bit challenging in such a big place. My only regret for the night was not ever making it to the buffet table, though I did manage to scoff a whole pizza back at the hotel after party at midnight. Thank goodness no-body took any photos of that (?).

To all involved, congratulations. I can’t wait to see you in space. It was a complete blast to meet each and every one of you.

[EDIT:] The totally brilliant ‘Blocks’ from the forum has compiled a definitive list of links to videos, images and posts about the event… so go ahead and SATE YOUR HUNGER here. 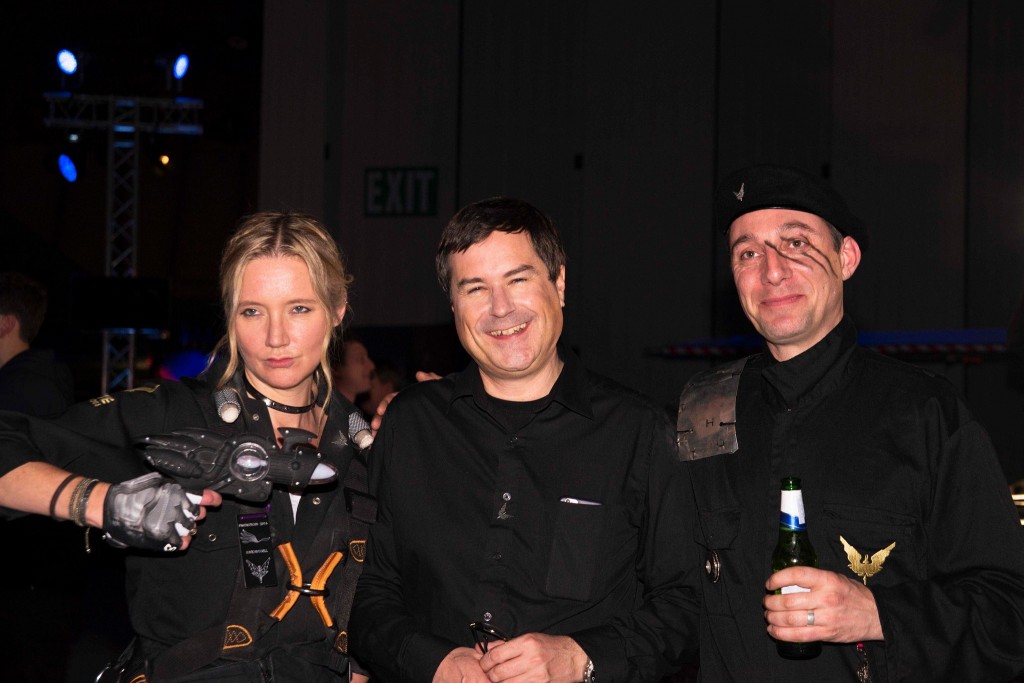 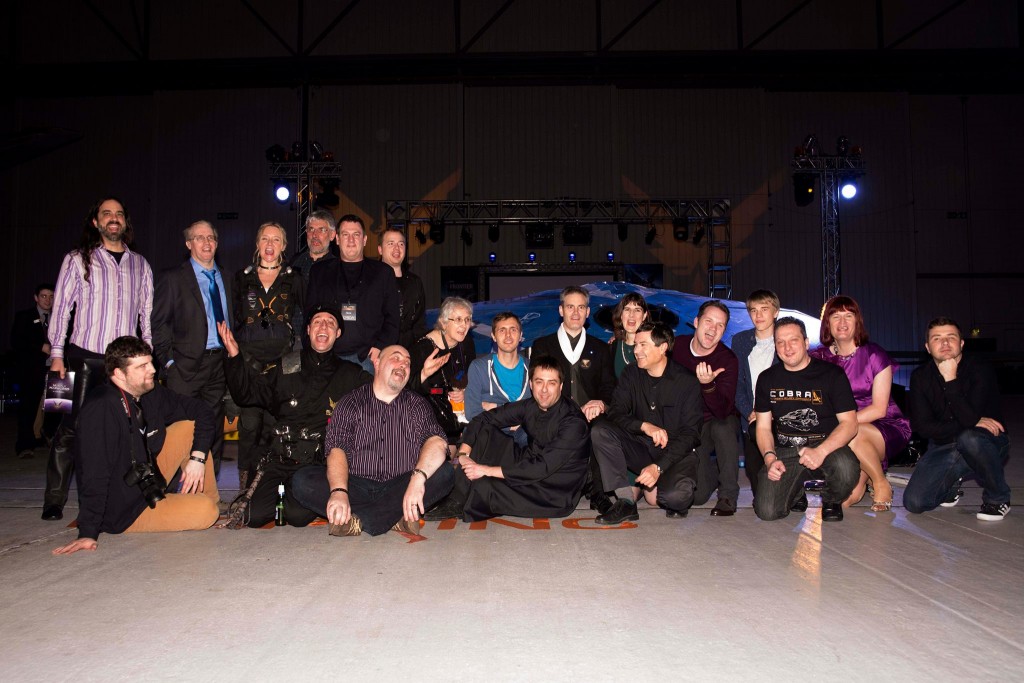 image Gabi Grubb Fantastic Books Publishing – the community reps we could round up!

Follow Kate’s Twitch TV channel, where she will be broadcasting her character’s in-game journey home to Slough starting 19th December.

THIS is what it’s all about.