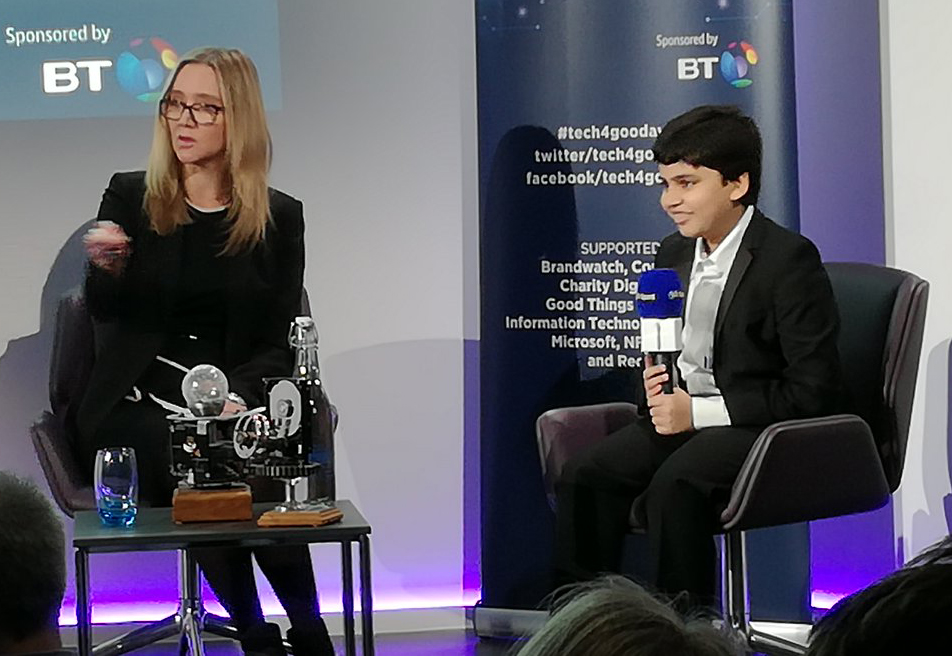 Last week I went to the launch of Tech4Good Awards, ‘an annual showcase for the amazing people who use digital technology to make the world a better place’. The award is sponsored by BT and organised by AbilityNet, a disability charity committed to enriching people’s lives.

The awards ceremony itself will take place on 11th July and I am delighted to say that I will be co-hosting it again this year with the wonderful Mark Walker from AbilityNet.

The opening of nominations was launched at the BT Tower on 10th March where I had the opportunity to interview the youngest ever winner of an Award – 10-year-old Arnav Sharma. Arnav won the People’s vote in 2016 with his brilliant invention Asthma Pi.

We also talked about the invention that Arnav is currently working on, a new app that will help people suffering from dementia. It is amazing how even at such a young age he thinks so much about the problems he sees around him and wants to come up with ways to solve them. He really can make a huge difference to people’s lives through his dedication, skill and creativity. It was a humbling experience to talk to Arnav who is such a caring young man and an inspiration to all of us.

Check out the highlights from last year’s awards:

The Awards are now open for entries for people living in the UK so if you are someone who is creating technology that improves people’s lives you should APPLY NOW!

Entries close at 5pm on 8 May 2017. Entry is free and open to any business, charity, individual or public body in the UK.

The great news is that Comic Relief is sponsoring a new award category – the Tech4Good for Africa Award – reflecting the large number of tech projects developed for Africa, taking Tech4Good on to the global stage for the first time as companies anywhere in the world can enter!