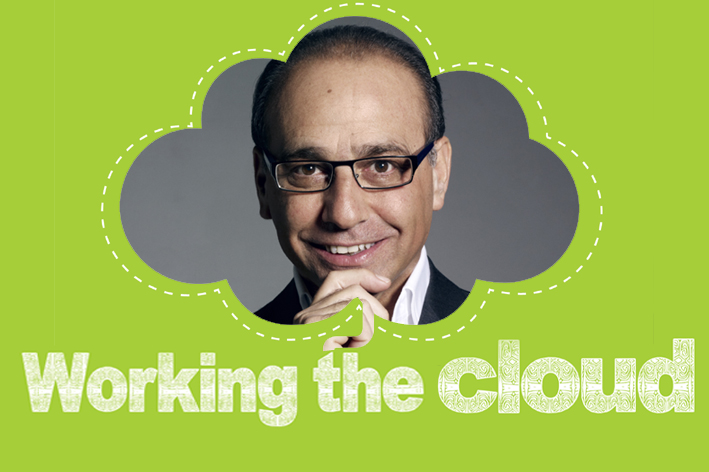 My interview with  Theo Paphitis for Working the Cloud was particularly challenging; not because he was hard to talk to (quite the opposite in fact) but the connection through Skype was so appalling it was like conversing with a detuned FM radio broadcast. So I decided not to use the full interview as a video like the others (which you can watch by downloading the Working the Cloud apps on iOS or Android), and instead have deciphered the chat and transcribed the full interview for you here:

WTC: You started your first business aged 23 I believe, but your first entrepreneurial act was actually setting up a tuck shop at school? How did that come about and did you learn any fundamental truths about business so young?

THEO: I was dyslexic so for me school was incredibly tough because I was considered to be thick and stupid. So I was in the lower streams of all of the subjects which meant you would normally be in the same streams as kids who are destructive. I was no different and that meant that I was causing trouble, and then one day a relief teacher took our class and pulled me out of the group afterwards. He actually realised that there was a reason why I was in the group and it wasn’t because I was stupid. Luckily for me. He gave me the role of starting the tuck shop up to keep me occupied. And that’s what I did at school. It was fabulous. I didn’t really work. That’s why I’ve got no qualifications but I know how to run a shop.

WTC: You’ve become well known for appearing on TV but you’re also very active online supporting and encouraging entrepreneurs through initiatives like Small Business Sunday. Tell us about that work.

THEO: The creation of Small Business Sunday was kind of an accident because, once upon a time I remember when my business was just me and one other person in a small office in Croydon. Every Sunday night after putting the kids to bed it would be time for me to sit down and plan what I was going to do that Monday – and that was key for me because when I went to work on a Monday I knew what my prospects were and I knew what I had to do. So I was already hitting the ground running. Then when I first joined Twitter I found it interesting because lots of small businesses were tweeting me. It reminded me that the hardest thing in the world when you’re starting up a small business is loneliness and also finding customers and new business. But here with Twitter I had this tool where I could tweet these guys to tens of thousands and then hundreds of thousands of other people and tell them about the product or work they are doing. What’s more, by creating a sort of club there would be some support when they’re feeling down and lonely – as we all do sometimes, especially in small businesses. It’s great working from your bedroom and it’s great working from your kitchen. It’s great working from your front room or your dining, but you know what? Sometimes you need to speak to somebody; you need to share your issues and you need to speak about things that are not going right. And when you start questioning yourself and you want to share it with people who are like-minded and have similar issues, I thought would this be a great opportunity to leverage me and all these followers that I’ve got to provide some free marketing. And that’s what we did. I came up with #SBS Small Business Sunday, putting a hashtag on it because it’s done on Sunday and between the hours of 5 and 7.30. So people who have a small business can tweet me and I will have a look at their tweets and just pick out 6 – I’m not endorsing them, all I’m doing is giving them the ability to do some marketing – and they get a place on the TheoPaphitisSBS website. There is lots of information on there – especially as a member – lots of help and ideas and above all else they get a photo at an event with me and a certificate which they can then send to their local newspapers, it takes the “cat stuck up a tree” picture off the front page because I am known and have been on television, so they get further exposure. So it’s up to them how hard they want to drive their SBS win to get PR and marketing. I’ve been very fortunate. So I don’t care how they want to use the opportunity if they want to use me to help their businesses.

Practically without exception, all of my winners have appeared in the local newspapers and without the photograph of me they would never have run it. Otherwise quite a few of them have appeared on local radio and some of them have even managed to get themselves on national radio; just leveraging the fact that they sent that tweet and it got re-tweeted to hundreds of thousands of other people. That’s great marketing.

WTC:When you started out in business there wasn’t the kind of access to support groups and free expert advice as there is online today. How much of a difference does this make?

THEO: 152,000 years ago when I was a boy, and even hundreds of years before I was a boy, the wealth of a gentleman and his family was judged by the size of the library because they associated a library with knowledge and if you had acknowledge you had power. It was as simple as that. Now, with technology the way it is everyone’s got knowledge just by using their mobile phone. You can access every bit of information . You can have a worldwide shop from your bedroom. You can do things that weren’t even dreamed of when I started off in business. It’s why technology is the most wonderful thing for small businesses.

WTC: Do you see more of an entrepreneurial spirit coming out in Britain since we hit the recession in 2008?

THEO: Recession always encourages entrepreneurialism and innovation. It does that every time because when people have no options they look at other things. If people are sitting there in a comfortable job receiving a salary it suppresses the entrepreneurial urge and they just carry on. But when you’ve got no choice you think ‘I’ll have a go for myself’. The most important thing for me with Dragons’ Den is that it simplifies business. And rightly so because at the end of the day a lot of people complicate business but we simplify it and the basic principles are absolutely 100% correct even though it’s a TV programme. The thing I preach constantly is do your your research; build your knowledge base. Don’t just go into business on a whim or a prayer – and don’t think ‘I’m an entrepreneur so I have to take risks’. Entrepreneurs don’t take risks. They take calculated risks; only the good ones. Do your homework and make sure you stack of cards in your favour. 50% of businesses fail in the first couple of years so why would you want to be one of those statistics? The reason you do your homework and your research and your testing of your business model is you want to stack the cards in your favour. Shifting the odds in your favour means the chances of you failing of a lot less than 50%. And there’s no reason and nothing to stop anybody shortening those odds for themselves.

WTC: People talk about having an original idea, or finding a niche market to be an entrepreneurial success – but does that mean without that ‘eureka moment’ you cannot start a business?

THEO: It’s rubbish to think that you have to have a unique idea in order to start a small business. I keep telling people there is no point sitting in that bath playing with your rubber duck and going all wrinkly until the water gets cold because you’re looking for that Eureka moment. Very few people have that Eureka moment. Instead, look for inspiration; look at what other people are doing and see if you can do it better. Identify markets that are not cluttered, that there is an opportunity for you to enter and make it into a living. We’ve all got some special skills. One of the best businesses I invested in from Dragons’ Den was Magic Whiteboard… It’s not an invention, it’s not an original product, they ship it in and they sell it. It’s not an idea but they’ve done incredibly well from it; incredibly well. So the answer is: put that rubber duck away and let out the bath water. Forget the Eureka moment. Open your eyes and look around you.

WTC: What would you say is the most important thing for small businesses to understand about the Internet today?

THEO: The Internet means everything to everybody at the moment and it’s growing by the day. You can’t survive as a business, especially a small business, without having some form of good Internet presence; whether you’re a shop or it’s a showcase or just a way to talk to your customers. The Internet today is where we all go to for the first stop of information. It’s not the library any more, it’s the Internet and if I want to find out about Kate Russell, what do I do? I Google Kate Russell. Simple as that.

WTC: If you could go back and tell yourself one thing you know now when you were just starting out, what would it be?

THEO: Apart from being able to tell myself this week’s lottery numbers, if I could go back in time and tell myself something as I was just starting out it would be ‘never just focus on one thing and think that defines the state of your business or success’. It’s the experience you have on the way and the key principles you apply in your life and your business which make you successful. Those are determination; desire; drive; hard work; the will to be successful. If you keep persevering with those traits you will be successful, and whilst I’ve done all those things throughout my life I have to tell you, like every other entrepreneur or business person, there were dark moments. Moments where you get despondent because things are not working out for you. And if I’d only had somebody who could have taken my hand and said “carry on, do all the right things and it will work, as long as you do all the right things”.

Don’t lose faith as that happens so often, it really does.

See who else was interviewed for Working the Cloud.