LATEST
Home Briefcase HOW TO: Get a career in the media 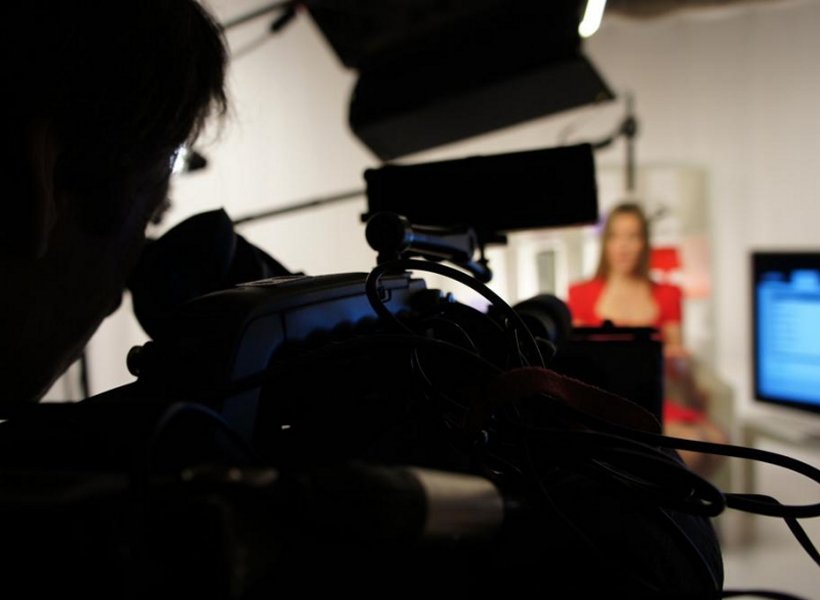 HOW TO: Get a career in the media

I get asked a lot for advice about getting a career on TV or writing for magazines. Specific advice is hard as people’s circumstances vary so much. I don’t know about everyone else, but here’s how it happened for me. I hope it helps others find a spark to follow an unlikely path through life too.

I didn’t do well in school, leaving at 17 with no real qualifications to boast about. After hopping from dead end job to dead end job I discovered I had an aptitude for sales. Sale jobs are great for building confidence and public speaking skills (all essential for TV work it turns out) and after about 8 years I was at the top of my game. But even though I was doing well financially, I hated it. It was a soulless, money-grabbing job that was all about maximum profit and gaining people’s confidence to achieve it. 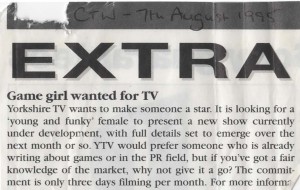 What I had always had a passion for was writing. Because of my brother’s interest in technology and the space trading game, Elite, as a teenager I also discovered a love of technology. Due to my affinity with gaming I ended up in a sales role selling video game production and distribution services, so I came to know a lot of people  in the games industry. One day a customer of mine saw an advert for a ‘young and funky female presenter who knows about games’ for a new Nickelodeon show, and he dared me to apply. I did, and I think because of my genuine passion for gaming, the confidence I had built up in the sales environment, plus the fact that I wasn’t desperate to be on TV like the other applicants so I was less nervous in the screen test, I got the job!

It was just 3 days a month up at Yorkshire Television’s studios to record the links, so I was still doing my sales job at first; earning £70k a year (in 1995!) with a company car and living in a nice 3 bedroom semi-detached in north London. But doing this TV show I saw an opportunity to take a new career direction, so I wrote some reviews for games I liked and sent them to the magazines I enjoyed reading with a cover note saying essentially “I’m on telly, g’is a job!”

Magazine publisher, EMAP Images, decided to take me up on that and offered me the PC review editor’s job on a brand new magazine called Maximum.

Now comes one of the hardest/bravest decisions I have ever made that utterly changed my life. I gave up my comfy, safe life to take this £11k a year job. I had to give up my car and I moved into a shared bedsit in Clapham because I could no longer afford a big house. It was a massive lifestyle change, and many of my friends and family expressed dismay that I would take such a huge step backwards. 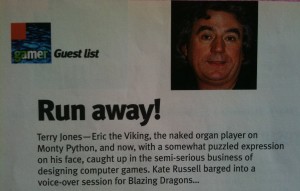 It was a huge risk too, as there was no guarantee the magazine would be a success. In fact the magazine only lasted 6 months, but again because of my sales skills, I was able to build enough contacts within the industry during that time to get work as a freelancer after it folded. This in itself was another big risk as in the beginning of any freelance career you are literally living from job to job, hoping you earn enough to pay the rent at the end of the month (and subsequently putting enough away to pay the tax bill at the end of the year too).

That was 19 years ago in 1995. I am still freelance today, although I sadly have a lot less time to play video games now.

For me the TV work has always been more about writing than being in front of a camera. The presenting stuff kind of just happened as a by-product because I was one of the few girls working in games/tech journalism in the late 90s when a lot of media organisations were trying to cash in on the trend. When Sky TV wanted to set up a channel all about technology in September 1996 they approached a bunch of tech journalists (myself included) and recruited us to work alongside their TV specialists at production company, Hewland International. In this role I started as a researcher/runner (the lowest of the low), and worked like a bloody maniac to help make the content on a very low budget for 5 years until the channel shut down (by which point I was fronting my own daily show, Chips with Everything).

Work Hard and Be Happy

In this environment I found the best way to progress was by working hard and enthusiastically, volunteering for extra work when the crappola hit the fan (as it often does in this kind of seat-of-the-pants low-budget TV environment), coming up with ideas to solve problems rather than fretting about them, and NEVER complaining about the job until the episode was finished, no matter how shitty the situation got. ‘Just keep smiling and get on with the job’ was my motto – save the post-match analysis for after the show has been edited and gone to air, because no one wants to work with a moaner.

In later years, as a producer employing researchers and runners myself, these are (sadly very rare to find) qualities I cherish above and beyond experience/qualifications and I will always reward them with additional job offers and promotions where possible… but that is just me! I couldn’t speak for other producers.

So really, I put my career down to four key things:

These days it’s a lot harder to get into mainstream media, as the marketplace is more crowded. I found my niche being a genuine girl gamer – and I would say that’s essential to becoming a TV reporter. You need to find a niche; know your subject and be passionate about it. If you just want to be on TV and don’t care how, perhaps reality TV is your best option?

If you do have a unique or memorable passion then the internet can offer some genuine opportunity these days. All you need is a webcam and something interesting to say and you can set up your own channel like YouTube star tyrannosauruslexxx.


She is 21 years old and has been doing this for a few years. She now has 100K+ subscribers and over 5million views. You can monetise this with advertising and eventually who knows, you might get noticed by a TV channel or production company?

If you like to write, start a blog. If you want to do radio, start a podcast. There are plenty of free tools to help you do this. But what isn’t free is the time and commitment required to keep making regular posts over a sustained period of time, which is essential if you want to build an audience. That comes at a personal cost to you as you will have to do it in your spare time until it makes enough money to support you (which is potentially never).

The other thing I tell media studies students when I lecture is to build up their social media presence. This is vital nowadays as a good social following is valuable currency in the media world. It tells potential employers several things about you:

That’s pretty much all the advice I can give – and I would caution you that my own experience was very different from most. If you are serious about a career in the media, these days you are probably far better off getting a degree in an appropriate subject, or seeking an apprenticeship, although I imagine the good ones are pretty oversubscribed. If you’re still in school ask your careers advisor to make an appointment for you to visit a media studies college or university and get advice from one of those lecturers. If like me, academia does not suit you, you will have to carve your own unique path – hopefully some of the above will give you inspiration or ideas you can use.