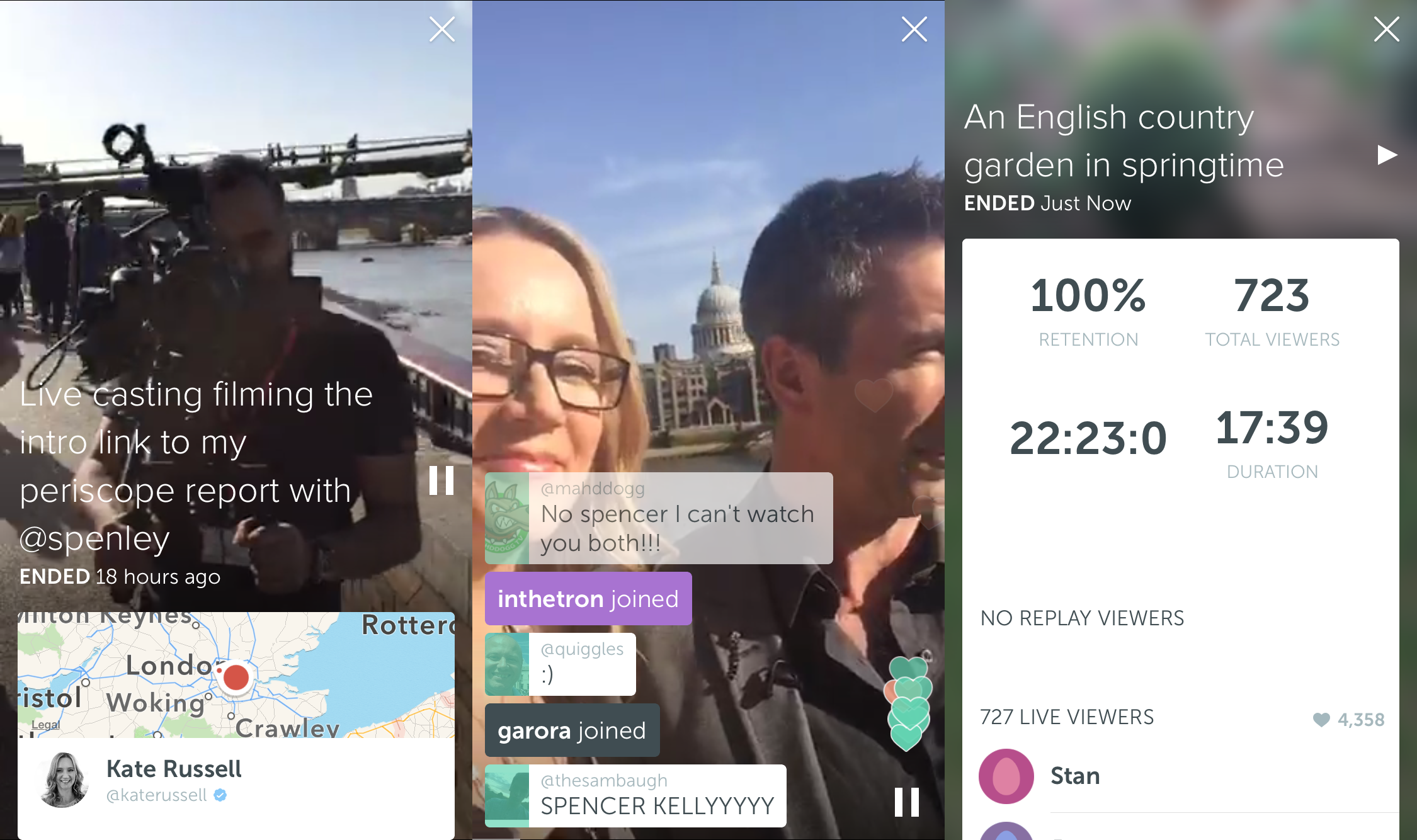 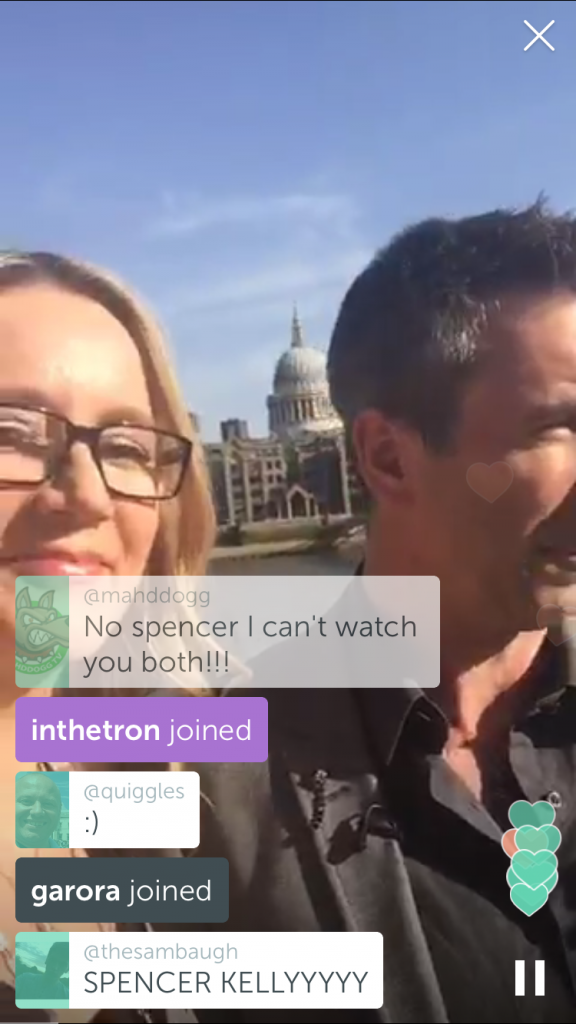 Reports of life-streaming app Periscope being overrun by perverts and claims that female streamers are routinely bombarded with sexual harassment are rife, and while I’m not saying that doesn’t happen, it is a million miles away from the experience I’ve been having. I’ve used the app for a couple of weeks now, broadcasting regularly from both at home and at work, and on the whole I have found my viewers to be lovely. They are funny, supportive and encouraging, and in the 20 or so broadcasts I have made, showing everything from a behind-the-scenes look at the BBC Click offices to a stroll through my back garden to enjoy the spring flowers, I have had to block a grand total of 2 people – and one of those wasn’t even for sexual comments. The other interesting thing about the audience demographic I have seen on my stream is that contrary to another popular media claim, they are not all kids. LJ Rich actually took her Periscope audience onto BBC World News when they were covering the story and when the second expert on the set stated that it was popular because all the kids were into it, I saw a tsunami of comments on LJ’s Periscope saying ‘I’m 65!’, ‘I’m in my 40s!’, ‘I’m 38!’ and suchlike. 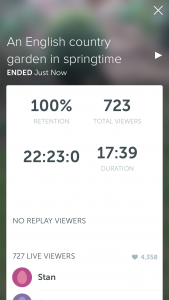 OK, let’s rewind quickly for those who’ve been living under a rock since March 26th, when Periscope launched. It’s an app (iOS only right now but the devs say an Android version is imminent) that lets you stream live video from your handset, or watch other people streaming and chat to them live through text comments. It really isn’t any more complicated than that, and that’s probably one of the main reasons it’s taken off so quickly, squeezing out competitor, Meerkat, despite that app having a couple of weeks head start in the market. Another likely reason for its meteoric rise is that it’s owned by Twitter, who have deep marketing pockets and a massive audience reach. Media coverage of threats to shut down the accounts of anyone caught streaming the premier of Game of Thrones, for example, certainly don’t hurt market visibility. 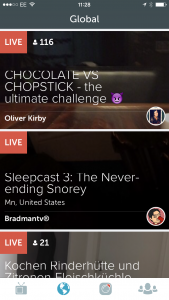 If you’re using the app as a viewer you can follow streamers you like and be notified when they come online. The key appeal of viewing, and what makes these apps different from previous iterations of streaming technology, is the ability to chat in real-time with the broadcaster. Viewers are able to ask questions, make comments and suggestions, and if they like what they see they can tap anywhere on the screen to give ‘hearts’ which go towards ranking a user’s global popularity. It’s also possible to share a stream, which will send a notification to everyone following you that you recommend they watch this broadcaster.

You can catch broadcasts you missed for 24 hours under ‘recent’, provided the streamer opted to save it for people to watch later. After this the broadcast is gone from public display as there is no archive attached to a user, making this very much a ‘here and now’ kind of experience. 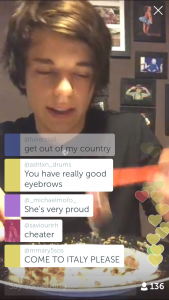 When you first boot up the app you’ll be asked if you want to follow all of the people you are currently following on Twitter who are also using the app -and if they join after you they will pop up in your people discovery list. You can also find random things to watch by scanning the global list, which shows a selection of streamers who are live right now. People broadcast anything and everything. I just watched a young lad eating chocolate with chopsticks along with 135 other people, and one guy broadcasts himself sleeping every night. If you’re wondering why they do this, perhaps a better question would be ‘why do people watch it?’ It’s strangely compelling having this intimate peek inside a stranger’s life.

But as well as the everyday mundane you also find a lot of media professionals broadcasting behind the scenes tours and magazines and brands use the platform to broadcast product launches and interviews. Another pretty interesting angle to the content is citizen journalism, with local events like a big fire being streamed to a user’s friends and family, which is useful for knowing that their loved one is safe and also when to avoid certain parts of the city.

Unsurprisingly, because this is the internet after all, streams of cats and other cute pets go down very well, and a bizarre trope of wanting to look inside people’s fridges seems to have taken the wider Periscope community by storm. 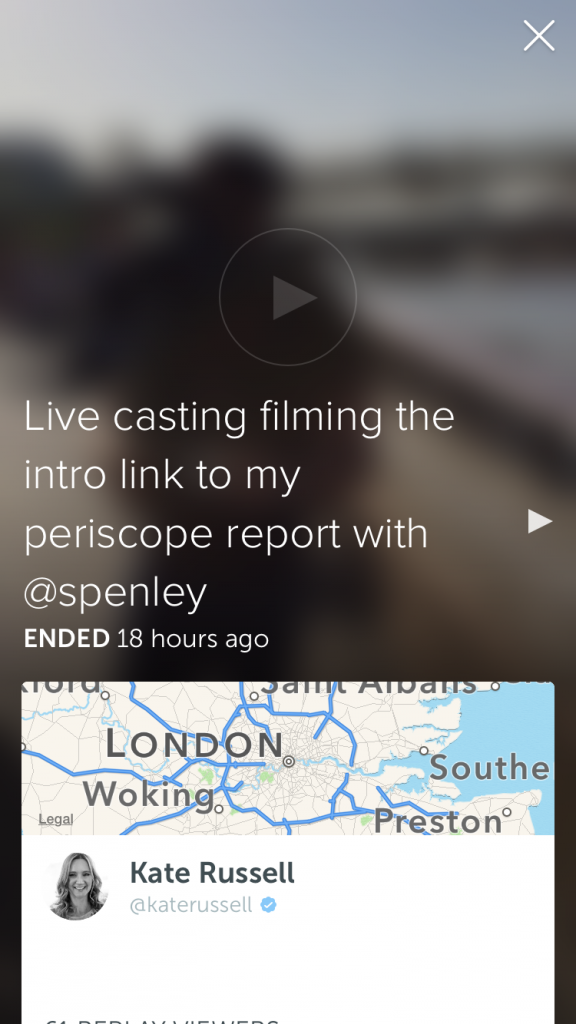 As a streamer you will have a unique experience governed by a couple of factors:

Who follows you: Because discovery inside the app is so limited people will only really find you by knowing who you are on Twitter, or if they randomly stumble upon your live feed in the global list and like you enough to follow you. I have quite a lot of Twitter followers already so my first broadcast (yes, it featured my cats!) was 2 minutes long and gained an audience of 200. A week later I broadcast a walk around my garden to over 700 people. It’s fair to say that because I am a female I most likely picked up more random viewers from the global list than my male counterparts, but again I want to stress that people were nothing less than charming, asking about my cats, complimenting the flowers and collectively tapping the screen over 4,000 times to give me hearts.

The titles you choose: This point by no means suggests that a streamer is ‘asking for it’ if someone watching them behaves despicably, but if your stream title says something like ‘a lazy morning in bed’ people are going to tap on it expecting to see you in bed, and if you are a woman that might attract a certain kind of attention you might not want. Some people are just vile. That is the case for real life as much as it is for the internet. So if you 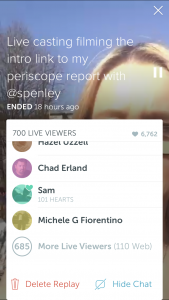 want to attract the right kind of audience you need to be thoughtful about how you describe what you’re doing.

Having said that, Periscope has made it incredibly easy to block people whose chat you don’t like – as a streamer and as a viewer. Just tap on the comment and hit the block button. This is 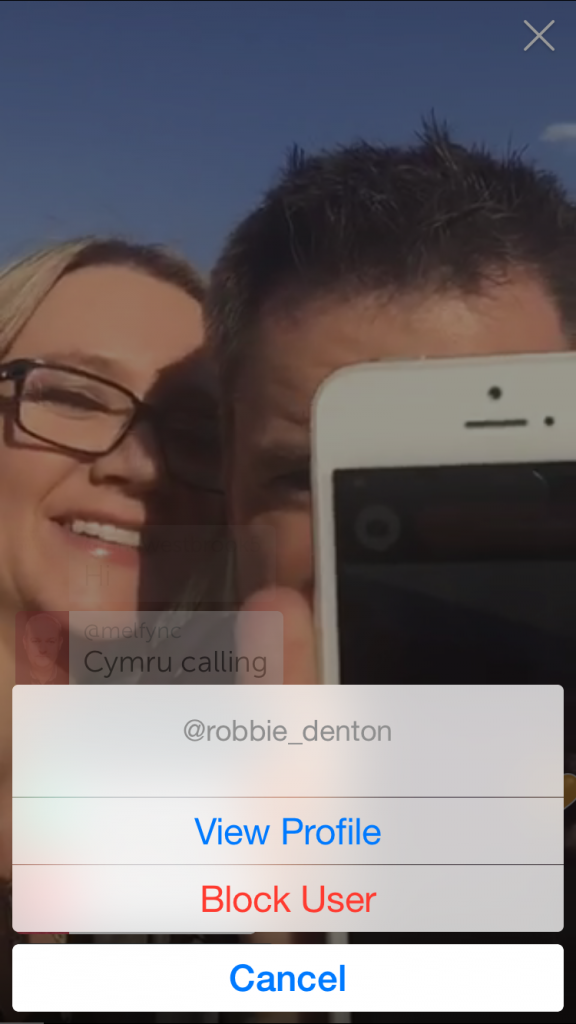 also the way to get to a user’s profile and follow them if you like. If you want to get rid of the chat completely, because it is obscuring your view of the stream, just swipe the screen right and tap ‘hide chat’.

A more recent addition to the features goes a step further in helping you weed out unwanted attention when you stream. Tapping the padlock on the broadcast set up screen lets you set up private broadcasts to just the people you select via a global search or from your follower list. This feature has an interesting future I think when it comes to monetising content you make as you could (in theory) invite a paying audience to watch your streams. I can imagine the adult entertainment industry making very good use of this in the months ahead. 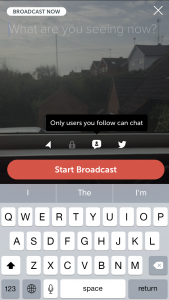 You can also leave the broadcast open but limit chat to only those users who YOU follow, which is a great way to make sure your chatters keep it clean and friendly, but is unlikely win you any new followers from the global discovery stream as the live interaction is what really makes this platform what it is.

Tapping the bird icon here will announce your broadcast on your twitter feed and provide a link for people who don’t have the app to watch through a browser. You will need to have Twitter logged in in your phone’s settings to activate this.

The final button here is to turn location tagging on an off. This was one of the biggest worries for me when the app first launched as during live broadcasts it was possible to zoom right in and see the precise location of the streamer. But in a recent update Periscope limited the zoom feature so you can only see a rough locality by town or city district.

For me the biggest problem with this app is discovery. The only way to actively look for new streamers to follow is by key word search, either for their username or terms that appear in their biography. It makes things a little hit and miss if you don’t already know them from Twitter. 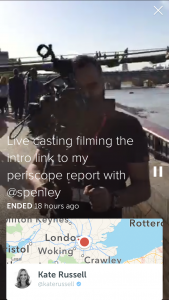 based on collective total number of hearts it’s not really a fair comparison when looking someone who has been streaming many times a day since the app launched to an occasional streamer who has only been on the platform a few weeks. It would also be nice to be able to filter the global live list by language as there is a huge amount of international traffic, much of which I cannot understand.

In searching for discovery resources I did find a couple of websites. StreamAlong TV has a stab at categorising content into subjects like Animals, Sport, Entertainment and suchlike, but I found a lot of irrelevant content listed in the categories and I’m pretty sure there are huge holes in the data it is using as according to the site there are very few live streams actually going on (which is not the case at all when browsing through the native app). Since this is a web only platform right now, where the ‘watch again’ feature is not enabled, I found it very hard to find anything to watch at all on this site.

OnPeriscope.com is an interesting site, although not exactly a discovery engine as it doesn’t categorise streams. Instead it serves up a page of links to streams that are live right now. I guess it’s early days for this app and if Twitter keeps the API open we can expect to see more creative talents coming up with ways to cash in on the craze.

The other massive problem you’ll have if you get hooked on this app is data. I streamed for about 11 minutes on 4g last week and with the live broadcast and then saving it for playback I used just over 250MB. Watching streams isn’t much better with a 30 minute session using around 400MB – so watch out if you’re on a low data plan. A good way to keep on top of this is to use something like DataMan’s (£1.49 from the app store) stopwatch widget, which sits in notifications and lets you measure exactly how much data you’re using during any session.