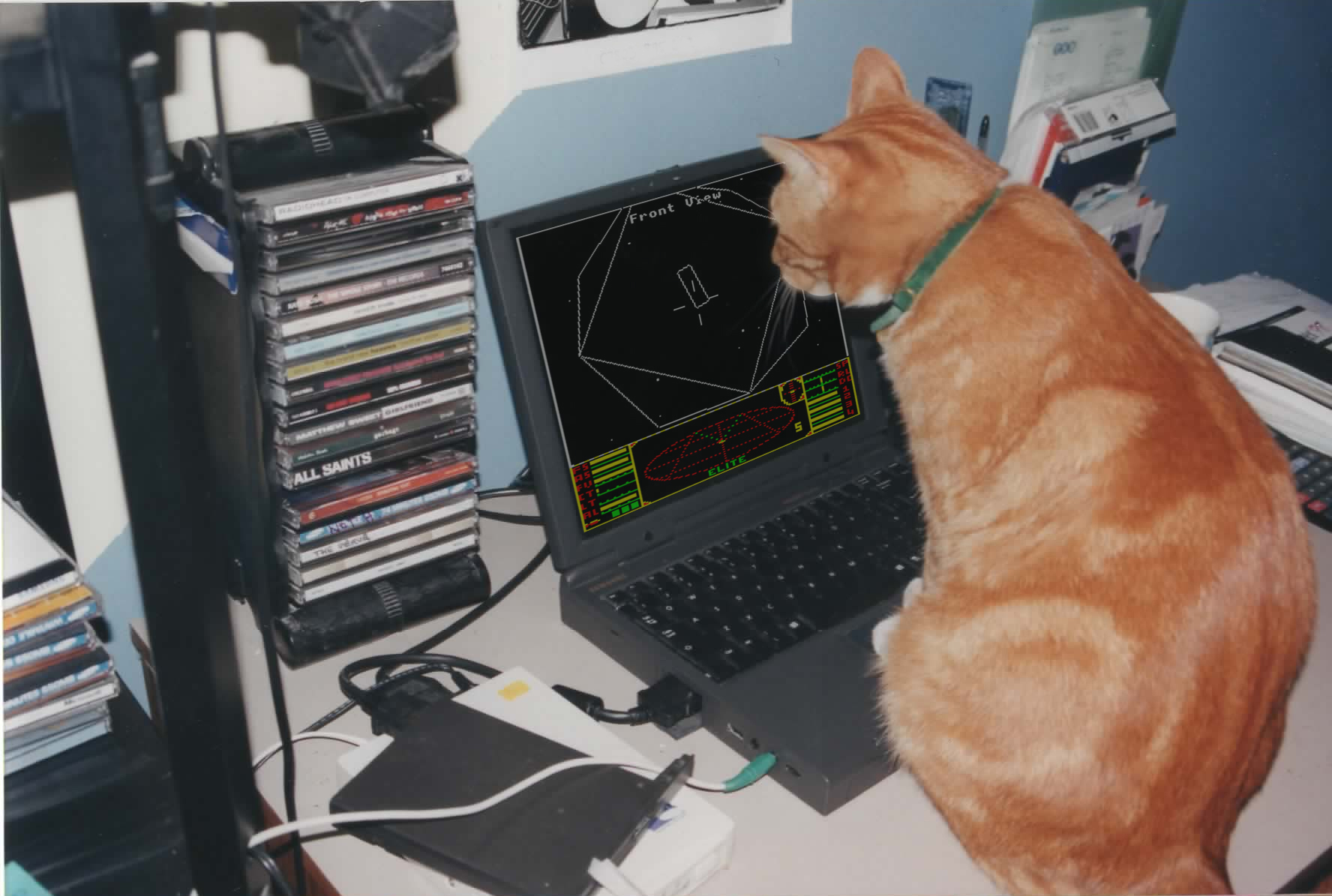 You don’t know me but I’d like to ask for your help with something.  You see, I’ve always fancied being a novelist. Despite leaving school at 17 with no real qualifications, and never actually having published any fiction before, I’m desperate to write a book. Something sci-fi… something funny. I think I’m a pretty funny person (my mum laughs at my jokes anyway). I read a lot of Douglas Adams growing up so I’m heavily influenced by him. I don’t actually know what the story will be about yet, but I do have a picture of my cat playing a video game.

My cat doesn’t actually play video games. I added the screenshot in Photoshop.

Whatever my story ends up being about my book will be ready in, ooh, let’s say 15 months or so? But if you buy a copy today, for £5 I’ll eventually send you an ebook and if you put in £25 I’ll throw in an unabridged audio book too – read by me. I don’t have any experience recording audio books by the way, but I am available and pretty cheap.

It sounds like a pretty ludicrous proposition when put like that, but this is pretty much how it went down for me at the start of this year when I ran a Kickstarter project to fund writing a book based in the world of the video game – Elite – that first got me interested in computers back in 1984.

4 and a half hours after launching the Kickstarter I had achieved the initial funding goal of £4242 and when it closed a month later I had a cool £17k of advanced orders from 811 courageous sci-fi fans who will have wait until March next year to see if their investment was worth it. (You can follow my progress here by the way)

In fairness I am probably over-simplifying things a bit relating this anecdote – let’s call it artistic license. My particular Kickstarter came about under unusual circumstances as the developers of the game, Elite, were selling licenses to write a piece of fiction as part of their Kickstarter project so there was a ready-made audience of willing investors who were all going a bit pledge happy at the time.

But my story is just one among hundreds of thousands right now. The phenomenon known as crowd funding, or to give it its formal, boring name peer-to-peer financing, is booming right now. Globally crowdfunding platforms raised $2.7 billion and successfully funded more than 1 million campaigns in 2012. That’s an 81% increase from 2011 and forecasts indicate an increase in 2013 to $5.1 billion.

Crowdfunding has become known as a great business model for innovative technology and arts campaigns and we’ve seen some incredibly successful projects projects obliterate their goals on Kickstarter, which is arguably the trailblazer platform in this field.

In another stellar example, Amanda Palmer, one half of pop duet Shakespeare’s Sister hit the headlines last year when she raised over $1million to fund her next album and tour.

But success doesn’t have to be on that scale to be meaningful. I’m willing to bet for most people reading this article a few thousand  pounds would make a world of difference – and one of the things I have come to understand through this whole crowd funding experience is that people generally want good, independent projects to get funded, and a surprising number of them are prepared to get their credit cards out to back that up.

There are a few different types of crowd funding model, depending on what suits your project. The key ones are:

Top tips for running your own campaign:

UK financial regulation does not really cater for crowd funding as is fully described in this excellent article on the NESTA site. To summarise that post, the notion of crowd funding is essentially bringing ecommerce to the financial services industry. As we’ve already discussed the term ‘crowd funding’ itself really only describes a marketplace concept and there are several different models which involve different legal instruments, such as donations, rewards, equity etc. For regulatory issues you need to look to the model for guidance, and some (such as equity investments and consumer product rewards) are more highly regulated than others (read the NESTA article for detailed descriptions). Work is ongoing between the government and various industry bodies to ensure any regulatory framework that is devised doesn’t stifle the opportunities crowd funding presents for small, independent projects.

There are a lot of bad stories flying around about the web right now but I want to close with something I hope will inspire you if you’re thinking about turning to the crowd for funding of your own idea.

Last year a video showing a sixty-eight year old grandmother being bullied by a group of young boys was posted on Youtube. Titled ‘Making the bus monitor cry’ within a few days it had been viewed by millions of people. But then something special happened. One young man who had been bullied himself as a child decided to set up a crowd funding campaign to raise $5000 and send that harassed bus monitor on a holiday. Within days the fund had surpassed half a million dollars and eventually closed turning over a cool $700,000 fund to bus monitor Karen Klien. The Internet had spoken, and it sent a message loud and clear that bullying is not OK, and mean spirited people are not the ones who win.

The crowd has real power online and it’s worth remembering in among all the bad news that, on the whole, the crowd is made up of very good people.