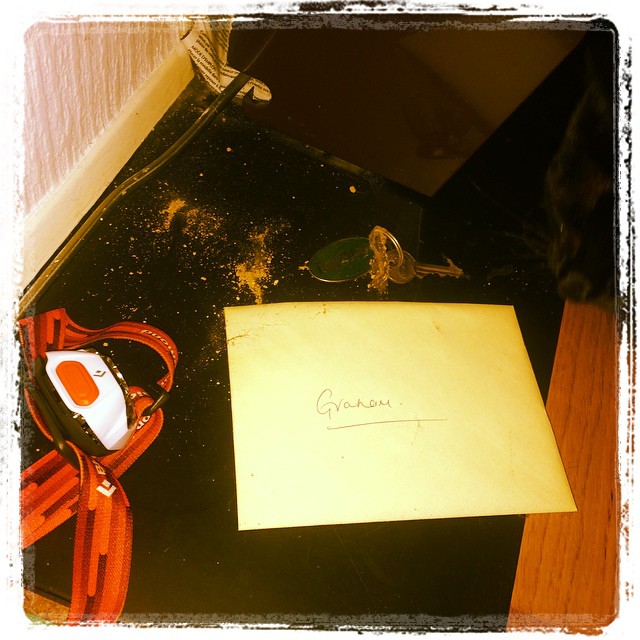 After chatting on air with Nick Coffer on BBC 3 Counties radio about ‘the mystery of Graham’ I have the exciting news that he has invited me onto his show at 1pm on Friday 31st October for the ‘grand opening’… I will be revealing the winning stories, sharing a summary of the best story lines entered (hopefully with a spooky twist in celebration of Halloween), and unveiling the real ‘Graham’s Story’ by opening the sealed envelope live on air… The studio bosses are a bit nervous so we may have to put in a 0ne-record delay on actually reading it out… as we don’t know what we’ll find… Will the real Graham turn up to claim his envelope? Will it be something morbid we can’t read out on air? There genuinely is only one way to find out…

Make a date to join us now!!

Something peculiar happened last night. Those of you who were on Twitter around 10pm might have seen me posting about it. I was relaxing on the sofa watching TV when one of my cats brought in a mouse, helpfully letting it go so that it escaped under the gas fire. I know from previous experience this has the potential to be a royal pain in the behind; I once had a 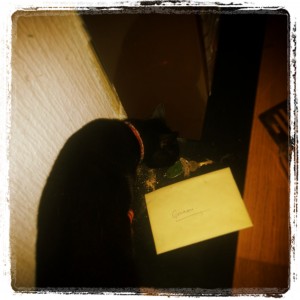 mouse-in-residence for four weeks under the cooker until I eventually managed to chase it out one night with a hair dryer. So I grabbed a stick and started poking around behind the fireplace, adorning my trusty head torch to throw a little light on the subject. 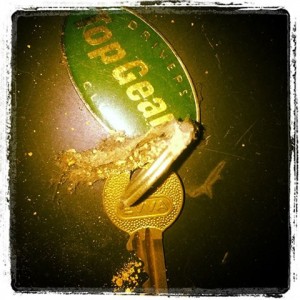 As I poked and prodded, pushing aside 40-odd years of dust-encrusted cobweb and goodness know what else, I noticed there was something stuck down behind the fireplace fitting.

With the help of several kitchen implements (and a less than helpful cat who had decided this was a riotous game) I eventually managed to extract an envelope, addressed to ‘Graham’, and a yale key on a Top Gear driver’s club key ring. 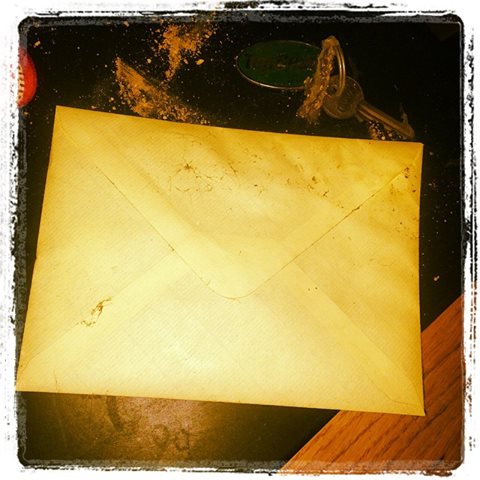 So, why am I telling you this? And why, despite lots of pleas last night and this morning to open the envelope, does it remain sealed? The #mystery was so appealing to me – my heart was beating with the thrill of the discovery as I finally coaxed the envelope out of its hiding place with the help of an extra long spatula – that it got me wondering what kind of story would be unraveled. Since life is rarely as exciting as fiction, in some ways I don’t want to spoil the mystery… at least not just yet.

So, I decided to have a little fun with this and run a competition. Here’s the deal… I want you to write ‘Graham’s Story’ … it can be from whatever perspective you like – the letter writer, the house, Graham himself, something else entirely – the only creative stipulation is that it must explain what is in the letter and how it got to be behind the fireplace. The winners will not necessarily be the most plausible stories… and while they need to be readable I will not be using your literary skills as the core quality I will judge you on. What I am looking for is exciting, unusual and creative imaginations of ‘Graham’s story’… which can be based on some kind of reality or be complete, magical or even horrific fantasy…

I have no idea how many people will enter, so I cannot guarantee a date by which I will announce the winner but I will do so as quickly as possible. I may draft in some help from my author friends to judge if they are willing and able. 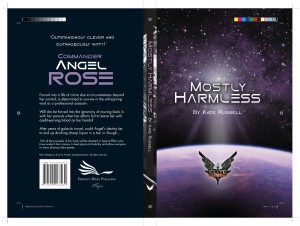 1st prize will be a signed hardback copy of my book, Elite: Mostly Harmless and publication on this website.

2nd prize will be a signed paperback copy of my book, Elite: Mostly Harmless and publication on this website.

3rd prize will be an e-book version of my book, Elite: Mostly Harmless and publication on this website.

I will be posting the winners stories and any honourable mention tales here once the competition has been judged and the winners announced. I also reserve the right to edit your stories for grammar and spelling before publishing, although I promise I will not essentially change the story.

Judges decisions are final and will not be explained…. I’ll hold my hands up right now and admit, it will be entirely subjective based on which stories the judges (including and possibly exclusively myself) enjoy reading the most.

After the winners are announced and published there will be a ‘grand opening’ when I will finally open the actual envelope addressed to Graham and we find out what’s really inside it. I fully expect this to be a massive disappointment, so make it count with your short stories.