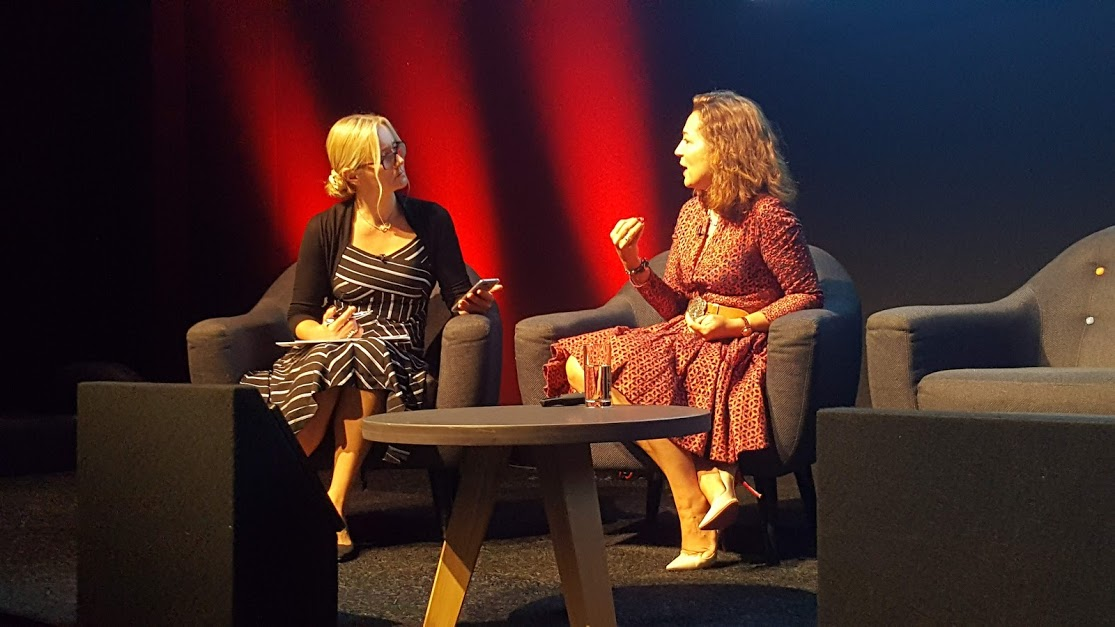 Up for a super early start, I made my way to the RAI convention centre in Amsterdam for IBC2018 where I would be spending the day working as a Personal Assistant for the wonderful Kate Russell. 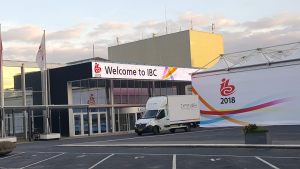 I knew that I would be shadowing Kate during various keynotes, talks, discussions, panels and interviews but having minimal experience and knowledge of all things broadcasting related, I had very little idea about the content that would be covered.

The first keynote was titled ‘Blockchain: Empowering content creators’. ‘Oh no!’ I think I should’ve done more background research! The only thing I know about blockchain is that I’ve heard the word before and I think it’s a type of cryptocurrency… 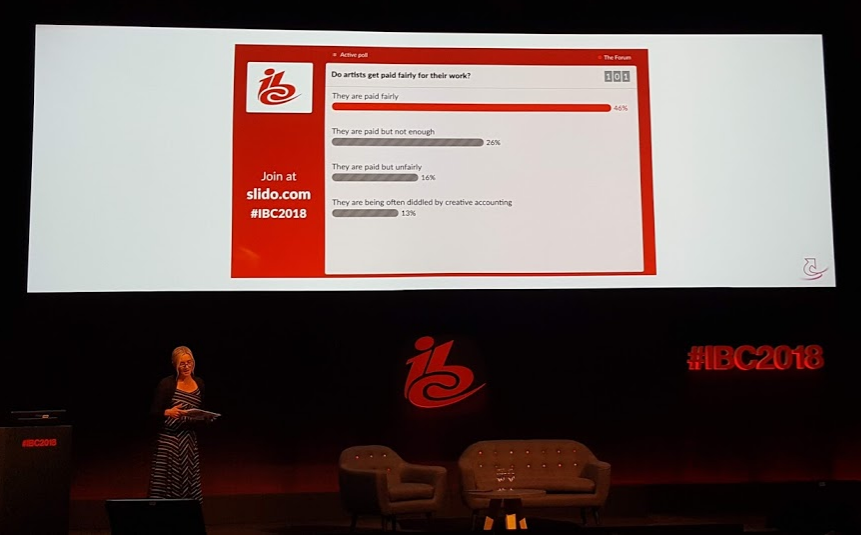 Kate introduced the keynote with some audience participation using live polling via sli.do and we take a quick look at the power of live audience feedback. We’re asked ‘Do artists get paid fairly for their work?’ (Results are from an audience polled at 3% creatives and 40% engineers so not a fully representative sample) before we hear from Kim Jackson (Co-Founder and President of Entertainment at SingularDTV) and Maurice Schutte (Producer and Co-Creator of Space Beers) about the benefits of creative work using blockchain instead of conventional methods. 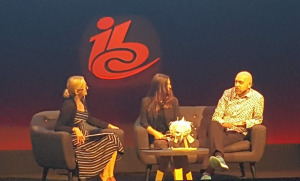 My understanding of the blockchain is that it’s a connection of everything someone might need to create and deliver a digital creative project, such as a movie. Every contract, transaction and alteration is permanently recorded on the blockchain so there’s complete transparency throughout the entire supply chain. Investments can be private and/or via a type of crowdfunder that allows supporters to purchase ‘tokens’ which are used within the blockchain to fund the project – a bit like buying a direct share.

The benefits of a transparent peer-to-peer system are enormous:

To round up the session, we were asked ‘”If IP tracking and distribution was tokenised, would artists be more fairly paid?” The majority answered ‘It’s probably part of the mix but there would still be problems’.

It’s early days for blockchain – Kim Jackson says ‘We are in the dial-up stage of the market’ but there’s definitely some interesting potential there! 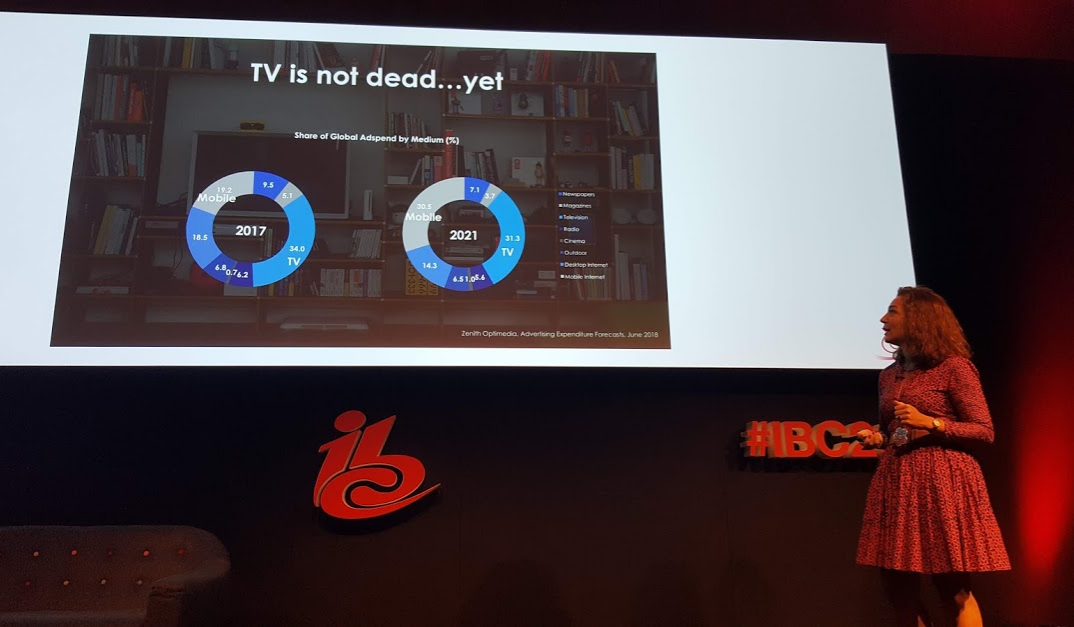 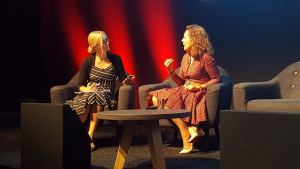 An absolutely fascinating talk and interview with Maria Garrido (Chief Insights & Analytics Officer Havas Group & CEO at Havas X), which really reinforced how quickly media and entertainment consumption is changing and completely set the tone for the day. We’re becoming less and less likely to spend time on media/entertainment that doesn’t engage us – we don’t need to. With increasingly advanced algorithms being employed by providers such as Spotify and Netflix, we can just engage in what we know we like and with new technologies like Alexa (the digital, virtual assistant created by Amazon), we’re starting to see this kind of ‘search engine/recommendation result’ solution being applied to all aspects of our lives. We’re also starting to see the challenges that this is creating for companies – brand recognition is down massively with people asking Alexa to buy ‘laundry detergent’ and ‘batteries’ for example and ad blockers are coming pre-installed on some phones now. Companies need new and creative ways to engage with their potential customers.

Next, we had a talk from Jennifer Cooper (Managing Director, Media Industry Strategy & Solutions at Microsoft) and Sudheer Sirivara (General Manager at Microsoft) titled ‘Audience growth across digital channels with core search, cloud and data driven platforms’ about the Microsoft Azure platform which I’ll be honest, went mostly over my head.

This session really highlighted for me the concerns that television broadcasters have about digital, virtual assistants (like Alexa) and what it is that will determine the results that these assistants suggest. For example, if I said ‘Alexa. Show me a documentary/show about XYZ’, what determines which results I get shown? On one hand, search result based television is great for niche subjects that viewers might not otherwise be able to find if they’re just flicking through channels or there’s not enough demand for it to be a scheduled program. On the other, there is the potential for ‘sponsored results’, with digital assistants making recommendations based on who has paid the most to be the top search result.

After lunch, we had another panel titled ‘Power of the podcast: How to reach new audiences through audio’ with Paul Robinson (CEO at Imira Entertainment), Sheena Peirse (Editorial Director, Online at ITV), Joeri Nortier (Product Manager at BNR Nieuwsradio) and Eduardo Martinez (Director of Technology at Steam Guys)

This session talked about similar themes from throughout the day (audience engagement and search based media/entertainment consumption) but in relation to podcasts. Personally, I’ve always thought of podcasts as being the medium that high-flying entrepreneurs use as they’re multi-tasking their way through life but apparently they’re super powerful for reaching young and niche audiences. ITV had massive success with the podcasts that they released alongside ‘Love Island’ and the World Cup as they allow for a seemingly more intimate connection for the viewers. BNR Nieuwsradio are using podcasts in a slightly different way and creating a SMART Radio which uses a complex in-house algorithm to recognise the content in audio files (such as news reports, podcasts etc) and creating personalised radio stations. Eduardo Martinez rounded up this session by speaking about how podcasts can be monetised by integrating ads that relate to the podcast’s content so alongside our personalised content, there’s also the potential for personalised ads.

Finally, to end a long but amazing day, we were back in the Forum for a really interesting keynote and interview session with Ade Rawcliffe (Head of Diversity at ITV Commissioning) about ‘The way forward on the road to inclusion’ 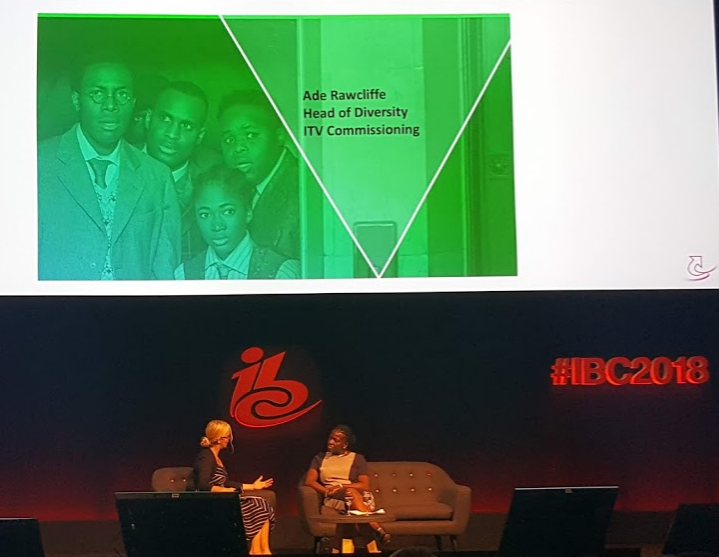 Ade talked about improving inclusivity both sides of the camera and how we can all work together towards achieving greater diversity. One of the key ways that Ade suggested we do this, is to make a point of watching entertainment that’s different to what we’re used to – to familiarise ourselves with different cultures and ‘normalise’ diversity. This point in particular stuck with me because after a day of hearing about how we’re going to have these super advanced algorithms in the future that know how our day’s been, what mood we’re in and what we want to watch, how are we going to find anything that’s outside our ‘norm’?

All of a sudden, the day was over! I had an amazing time meeting many wonderful people that were really authentic and enthusiastic about the work that they’re involved in.

The key points that I’m taking away from my day at IBC are:

There we have it! My observations, thoughts, theories and speculations of my day at IBC2018! What are your thoughts about all of this? Let me know on Twitter @GemmaNCrawford

Many, many thanks to Kate for this wonderful opportunity and an absolutely fascinating day! 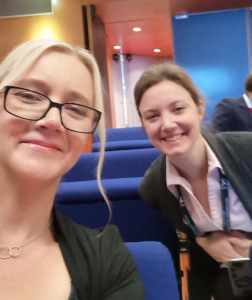